This week saw continued concerns about the availability of personal protective equipment (PPE) and the supply of ventilators across the country as hospital admissions related to Covid-19 continued to rise.

News coverage of the pandemic in the UK was understandably dominated by Boris Johnson’s admission to hospital on Sunday evening. This led to questions about the ultimate leadership of the country’s response to the pandemic. Foreign secretary Dominic Raab is deputising for the prime minister and has insisted that decisions will be made collectively by the cabinet.

The prime minister was admitted to St Thomas’ Hospital in London on Sunday evening for tests after continuing to have persistent symptoms since he tested positive for the virus 10 days earlier. He was subsequently moved to the intensive care unit. On Wednesday afternoon it was reported that he continued to make steady progress, although he remained in ICU on Wednesday night.

Concerns about PPE continued to be raised across the country, despite the start last week of a new supply channel dedicated to PPE, which is using a push distribution model. In written evidence to the Health and Social Care Committee’s inquiry into the management of the coronavirus outbreak, the Royal College of Nursing said the current situation was ‘unconscionable’.

‘We call for access to adequate supplies of PPE that meet the required safety and efficacy standards, including hand sanitiser for nursing, midwifery and social care staff for use at the point of care, in all care settings,’ it said. It added that inadequate supplies had led to nurses being required to re-use equipment, use out-of-date equipment and clean down old gowns with alcohol wipes.

Saffron Cordery (pictured), deputy chief executive of NHS Providers said that trust leaders saw PPE for their staff as ‘an absolute priority’ but acknowledged there were continuing concerns, despite real progress in distribution. ‘It’s vital these are addressed as quickly as possible wherever they arise – be it in hospitals, mental health, community or ambulance settings – or indeed in other areas such as hospices and social care where we are aware of continuing difficulties,’ she said. 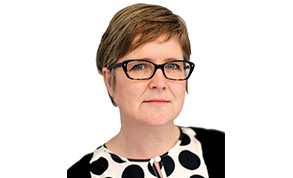 On a specific concern about clinical gowns she said that national leaders believe there are sufficient stocks. However, she said that distribution was still ‘lumpy’ with supplies greater in some places than in others. The national bodies want trusts with significant supply to share with others in the knowledge that further deliveries are scheduled to arrive soon. NHS Providers said it would be helpful for trusts to have more detail on current and estimated future stock levels and delivery timings.

The representative body is also calling for a debate about the sustainability of PPE stock, describing running out of stock as the ‘greatest PPE risk’.

Hospitalisations are continuing to rise as are daily reported new cases, with the latter also influenced by increasing testing capacity. However chief scientific adviser Patrick Vallance said that looking at the trendlines, the numbers were not subject to a major acceleration. It will take a further week or more to see if there are firm signs of the curves flattening off.

The first Nightingale hospital – operating out of the ExCel conference centre in London – took its first patients this week. The field hospital – with an initial capacity of 500 ventilated beds, but the capacity to hold up to 4,000 – is a response to the potential increase in demand for intensive care beds beyond London’s existing capacity.

However, there are still concerns about meeting demand for ventilators despite the increased critical care capacity. Dr Layla McCay, director of the NHS Confederation said that, while extra ventilators were being bought, the NHS was still far from the 18,000 target set by the government. ‘We cannot afford for ventilator supply issues to become PPE part two,’ she said.