With reports highlighting that people are being required to travel hundreds of miles for coronavirus tests, the government’s Covid-19 testing programme was again in the spotlight this week.

The reports suggest that people booking tests in London have been directed to testing sites in Cardiff and the Isle of Wight. People from Devon have been signposted to Carmathen, while some Cumbrians have been offered Dumfries as their nearest best option.

The problem is that some test centres are having to reduce the available slots to ensure high risk areas can be prioritised. A spokesman for the Department of Health and Social Care said that regional testing slots were allocated based on the nearest testing site with availability. ‘We are working to ensure this takes into account journey times and distance,’ they said. With the issue hitting the news, on Thursday it was announced that improvements were being made to the allocation system to ensure people are not directed to a testing centre more than 75 miles away.

However, these supply and demand problems are despite the current number of daily tests being undertaken nationally falling well below the current capacity for testing. Widely quoted figures suggest that the government’s network of labs has a capacity to process 250,000 tests a day, with just 175,000 actually being performed.

The specific figures are hard to pin down and to understand.  According to the gov.uk website, on 3 September, 175,687 tests were processed, while capacity across all pillars stood at nearly 370,000. Capacity across pillar 1 (swab testing in government labs for healthcare workers and those with clinical need), pillar 2 (swab testing in community) and pillar 4 (blood and swab testing for national surveillance) stood at nearly 250,000. (Pillar 3 involves antibody testing to understand who has had the virus.)

The latest weekly statistics published by the NHS Test and Trace service for the week to 26 August show that the testing capacity for the week across the whole UK was just under 2.7 million tests – suggesting an average of 385,000 per day and an increase of 18% since the previous week. However, it also says that just 1.5 million were processed across all pillars – or just over 200,000 per day.

However the report goes on to say that just 452,679 people were newly tested for Covid-19 in England during the week in question – an average of just 65,000 a day. The median time taken to receive a test result after taking a test has decreased for in-person testing, but increased for home and satellite testing – although this should be seen against a background of increased testing.

On the contract tracing side, some 7,683 people were transferred to the tracing service and just over 81% (6,257) of these were contacted. Eight out of ten of these people provided details of one or more close contacts. Just over 31,000 close contacts were identified in total and of the 23,401 non-complex contacts (those not linked to outbreaks in specific institutions), 14,000 (60%) were reached and asked to self-isolate.

While the figures suggest some progress is being made, improvements are not coming fast enough, according to the NHS Confederation. ‘The government is making progress on test and trace with increases in capacity and numbers being reached, but these improvements are small steps when its own aspirations are for giant leaps,’ said director Layla McCay (pictured). 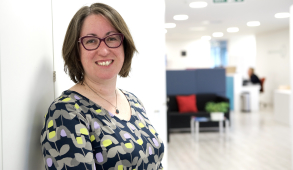 The government has just announced a new £500m funding package for next generation testing technology, including trials of a saliva test and a rapid 20-minute test. And a new Lighthouse Lab is set to open near Loughborough by the end of September as part of plans to boost testing capacity to 500,000 tests a day by the end of October.

Dr McCay said the new funding for trials to scale up testing capacity couldn’t come soon enough. ‘The less invasive method being piloted would help increase people’s uptake of testing and the faster turnaround times for test results would enable those who test positive to self-isolate quicker,’ she said. ‘Both approaches should help reduce transmission, which is incredibly important.

However, she criticised the reduction of testing capacity in some areas to cope with outbreaks. ‘People being able to access tests when they need them is such a key part of the national strategy to prevent spread,’ she said. ‘The ambition must be to increase testing capacity considerably.’

NHS Providers is also demanding faster progress. Deputy chief executive Saffron Cordery said the latest stats report reflected a mixed picture. ‘Of those cases that were transferred, a higher proportion of positive cases were reached, and a higher number of close contacts were identified, but a lower proportion of the close contacts were reached,’ she said.

‘The turnaround times for swab testing within the community also remain below what we would like to see, despite small improvements this week. It is vital improvements are made quickly as we move towards the winter months.’

Away from testing, the Nuffield Trust has been looking at A&E attendances by children and young people during the Covid outbreak.  Recent analysis by The Strategy Unit has shown significant falls in A&E attendances in those 19 and under. Nuffield Trust senior fellow Elizabeth Fisher argues that some of this fall will be due to lockdown and social distancing measures having a beneficial impact on a child’s health. For example, respiratory conditions might have benefited from reduced road traffic during lockdown. Closed schools mean viruses and bacterial infections don’t circulate as much.

However, Dr Fisher says the figures also suggest parents and individuals balanced the risks of Covid-19 against other healthcare risks. Understanding why people stayed away or if they accessed other forms of care would help inform the development of out-of-hospital care for this important cohort, she concluded.

A briefing note from NHS England and NHS Improvement to the Health and Social Care Committee aimed to address questions the committee had asked as part of its inquiry into Delivering core NHS and care services during the pandemic and beyond. One question asked how much funding the NHS would need to return to its pre-Covid run-rate of activity.  The response, issued in August but only published this week by the committee, was predictably non-committal.

‘The government has confirmed funding for the remainder of this year to cover some continuing use of independent hospitals, nightingale reserve capacity and community health discharge services,’ it said. ‘We understand the government intends to make decisions in the autumn spending review about the need for any future waiting list “catch-up” and any resulting need for permanent additions to NHS capacity and the funding consequences arising from that.’

The spending review will need to address budgets for key areas that have not yet been announced. In particular, this will cover capital and education and training allocations. But there continue to be calls for additional funding to go beyond these areas and acknowledge the pressure of running ‘normal’ services, while maintaining capacity to cope with a further Covid spike.

Unions are getting increasingly vocal about the need to also provide sufficient funds to increase NHS pay. The GMB union has called for a real-terms pay increase of around 15% for health workers to make up for a decade of real term pay cuts. Agenda for Change staff were not included in pay increases announced earlier this summer for public sector workers including doctors and dentists as they remain part of a three-year deal negotiated in 2018. (The GMB was the only health union to reject the original deal.)

Unison has also demanded an increase of at least £2,000 for each employee – equivalent of around £1 an hour – and wants it to be paid before the end of the year. The union’s head of health Sara Gorton said that with a tough winter ahead and the pandemic showing little sign of disappearing, staff should be given a morale boost now.