A more sombre tone was struck by ministers this week amid concerns about vaccine efficacy against new Covid-19 variants, with hospital pressures reducing steadily but still remaining high.

Reports emerged early in the week that South Africa was halting use of the Oxford/AstraZeneca vaccine after a small further study suggested the vaccine was not effective against mild to moderate infection with the B1.351 variant that is dominant in the country (the South Africa variant). Some European health authorities have already restricted this specific vaccine to people aged under 65, citing insufficient data on the protection it offers to older people.

However, the World Health Organization this week backed the use of the vaccine for adults of all ages, while also giving some support to the UK adoption of a longer period between doses. In interim recommendations it noted that only a small number of over 65 year-olds were in the original vaccine trial and that further trials would produce more data soon. But it said that ‘immune responses induced by the vaccine in older people are well documented and similar to other age groups. This suggests it is likely that the vaccine will be found to be efficacious in older persons.’ Taking all evidence into account it said that it recommended the use of the vaccine in people aged 65 and over.

With the UK bucking the international trend by extending the time between vaccine doses to up to 12 weeks, the WHO also recommended an interval of eight to 12 weeks between doses.

And on new variants, it also acknowledged that the recent study had suggested a marked reduction in vaccine effectiveness against mild and moderate disease due to the South Africa variant. But the sample size was small and it said ‘indirect evidence is compatible with protection against severe Covid-19’.

These recommendations relate to the Oxford/AstraZeneca vaccine. Concerns still remain about the UK delayed second dose strategy as it relates to the Pfizer/BioNTech vaccine, given tests were based on two doses 21 days apart. BioNTech chief executive Ugur Sahin told Sky News this week he would be comfortable with a second dose given up to six weeks after the first and called for evidence to back up the strategy. 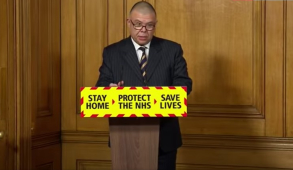 In a government briefing at the start of the week, England’s deputy chief medical officer Jonathan Van-Tam (pictured) said the emergence of new variants was not a ‘big fright or surprise’. While the headlines were scary, he said that the South Africa variant was not the dominant strain in the UK and did not appear to have a distinct transmissibility advantage over the UK’s dominant virus. If further protection was subsequently necessary, this would most likely be able to be delivered by a single booster.

It has been reported that an updated vaccine could be ready to be administered within six months.

Concerns over the impact of existing and possible future new variants was also reflected in ministerial announcements. On Wednesday transport secretary Grant Shapps warned that ‘people shouldn’t be booking holidays right now, not domestically or internationally’. And health secretary Matt Hancock talked of ‘uncertainty’ and the inability to give ‘categorical assurances’ despite previously talking up the prospect of holidaying in Britain this summer.

Latest figures show that more than 13.5 million people had received their first dose of vaccine by the middle of the week, putting the NHS on track to meet the government’s 15 February target. By this date, the aim is to have vaccinated (or at least offered a vaccine to) everyone over 70, all health and care staff, care home residents and the clinically extremely vulnerable – an estimated 15 million people. With the vaccination programme averaging around 420,000 vaccinations a day over the seven days to 9 February, the 15 million target is clearly in sight. And on Friday, Wales first minister Mark Drakeford said that with bookings made for the weekend, Wales had reached its first vaccination milestone in offering vaccination to everyone in the top four priority groups. Scotland also claimed a vaccination landmark this week, passing the one million vaccination mark. The programme was described as ‘moving at pace through the 70-79 age group’ and on track to complete this group by the end of the week.

Daily reported cases across the UK continue to decline from their recent peak early in January, with the seven-day daily average now around a quarter of 60,000 being reported at the start of the year. This is being mirrored to an extent in hospital admissions, but pressure on health services remains high. Admissions tend to lag cases by about two weeks and daily admissions of around 2,000 across the UK are about half the level being seen in mid-January. But there are still close to 26,000 confirmed Covid patients in hospital.

NHS England reported this week that almost one-third of all patients who have needed hospital treatment for Covid-19 since the pandemic began were admitted during January. There were nearly 102,000 hospital admissions in England compared with 242,000 treated last year. Occupied critical care beds remain high at nearly 5,000 and although there is further capacity available for the country as a whole, a number of providers remain at or close to capacity.

‘The NHS continues to be under enormous pressure, with over 100,000 people admitted into hospitals with Covid-19 in January,’ said NHS Providers chief executive Chris Hopson. ‘Critical care facilities, in particular, are under severe strain. Separate data shows that while we are now coming down from the peak of this wave, hospitals are still treating 10% more Covid-19 patients than the peak of the first wave in April 2020.’

The monthly performance statistics provided further evidence of the continuing impact on the NHS. By the end of December there were 4.5 million waiting to start treatment, and more than 224,000 of these had been waiting more than a year.

‘The government, national bodies and the public will need to be realistic about the time it will take to tackle this backlog, recognising the impact these strained pressures have placed on an already overstretched workforce,’ Mr Hopson said. There were some positive signs – a reduction in handover delays from ambulances to hospitals for example – but he added that ‘we are not yet out of the woods’.

Nuffield Trust chief executive Nigel Edwards (pictured) said the numbers waiting over a year for treatment represented an ‘unthinkable’ rise from this time last year. ‘We are now seeing Covid cases falling nationally and hospitalisations finally coming down, albeit slowly, from this deadly second wave of the pandemic. But hospitals are still exceptionally busy. There will be no flick of a switch to enable staff to work through this expanding backlog,’ he said. ‘Allowing healthcare staff the time to recover, ongoing infection control and the most extensive vaccination rollout in history, which may need to be extended to tackle variants, does, unfortunately, mean trade-offs will be here to stay for some years.’ 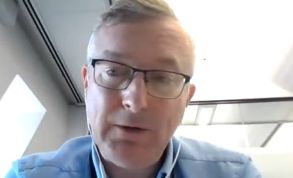 In Wales, NHS Wales chief executive Andrew Goodall (pictured) said that, although community cases were falling generally, the health service remained in a ‘precarious’ situation as it looked to cope with Covid-related workload on top of normal winter pressures. ‘We have four levels of escalation in the NHS,’ he told a midweek briefing. ‘Today there are eight hospitals reporting levels three or four, the two highest levels of pressure and two hospitals are at level 4.’

While the number of Covid patients in hospital was down by 25% on the January peak, it was still nearly 50% higher than the peak in the first wave in April. And critical care was operating at 116% of its normal occupancy level. ‘There has been some easing of pressure but not yet enough for the NHS to resume all its normal services and it wouldn’t take much to see the pressure increase again,’ he added.

There was further good news regarding treatments available to combat the virus. A study has shown that rheumatoid arthritis drug tocilizumab reduces the relative risk of death by 14% and reduces time spent in hospital by five days when used for patients on oxygen and in addition to the corticosteroid dexamethasone. It is hoped the rollout of the drug could help to ease pressure on hospitals in coming weeks.

Tocilizumab and sarilumab had earlier both been found to reduce the risk of death for patients when administered within 24-hours of entering intensive care. But further findings have now shown the drug benefits those outside of intensive care with oxygen deficiency and showing signs of worsening.

Health and social care Secretary Matt Hancock said work was underway to ensure ‘every NHS patient who needs this treatment should be able to access it – reducing pressures on the NHS and potentially saving thousands of lives’.

The reducing case numbers appear to be occurring in the context of increasing testing. The latest weekly statistics for NHS Test and Trace in England show that more than 3 million people were tested at least once in the week to 3 February. This is a staggering figure given that just 22 million people have been tested at least once since the organisation was launched – equivalent to a third of all people in the country. However, it needs to be seen in the context of very low levels of testing in the early months of the pandemic. (Some 75 million tests int total have been processed in the UK since testing began.)

The rapid expansion of testing in recent months is down to the additional use of lateral flow tests alongside the seemingly more accurate, but more time-consuming to turn around, polymerase chain reaction (PCR) tests. In the latest week, lateral flow tests accounted for nearly 2.4 million of the 3 million overall tests – a 17-fold increase over the numbers being used in mid-December.

There have been concerns about the number of false negatives produced by the lateral flow tests although academics from the universities of Liverpool, Harvard and Oxford have countered criticisms – suggesting that PCR and lateral flow tests serve different purposes. And in Liverpool, where the tests were piloted in the first city-wide mass testing programme, 12,000 people were identified as likely to be infectious. These people were asymptomatic and would not otherwise have been detected. 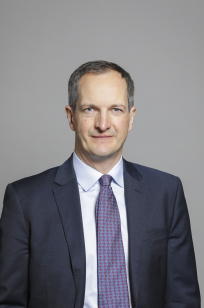 Health minister Lord Bethell (pictured) underlined the value of the rapid turnaround tests again this week. ‘The number of [lateral flow] tests conducted across the country has continued to increase at pace, ensuring NHS Test and Trace can identify people who are infectious, but not showing symptoms,’ he said.  ‘Around one in three people with Covid-19 don’t display symptoms. This means every positive lateral flow test helps us break a chain of transmission we wouldn’t have identified otherwise.’

Some 149,000 cases were transferred to the contact tracing system in the latest reporting week – down 25% on the previous week and continuing a trend over the last month. Nearly 130,000 of these were reached (87%) and 97,000 of these (74%) provided details of 265,000 close contacts. Nearly 94% of these were reached and asked to self-isolate. Results of four out of 10 tests in the community were delivered within 24 hours.

Miriam Deakin, NHS Providers director of policy and strategy, said she was encouraged by the falling case numbers and the high proportion of positive cases being transferred into the tracing system. ‘Test turnaround times continue to improve, with results from almost all in-person tests now being returned the next day, and we look forward to ongoing progress towards the 24-hour standard for all routes,’ she said. ‘We are at a pivotal point in the pandemic. It is absolutely crucial that the test and trace system plays its key role in the fight against the spread of infection. As debate turns towards coming out of lockdown, it is important that the system continues making positive strides. It is uplifting to see that it is on course to do so.’

One NHS Finance outlines next steps