The HFMA has recognised the contributions made by individual members to the work of the association with a flurry of honorary fellowships, outstanding contribution and key contributor awards.

In a bumper year for individual honours, the HFMA has made 18 awards across the three categories. HFMA chief executive Mark Knight said it was important to celebrate the work undertaken by individuals, which was fundamental to the continued success and development of the association.

‘The awards we have announced represent fantastic commitment from members of the HFMA, who are often balancing the demands of family life and challenging careers,’ he said. ‘Without individuals like these, and hundreds of others right across the UK, the association would not be the success it has been over many years. I’m proud and honoured to be associated with every single one of them.’

Honorary fellowships, which recognise members who have made a sustained and substantial contribution to the life and work of the association, are awarded as members retire from HFMA activity or full-time work or as they move beyond the NHS finance function, for example taking up an NHS chief executive role. Recipients are made free, lifetime members of the association. This year, the following people were made honorary fellows:

Rod Smith Mr Smith was nominated by the Kent, Surrey and Sussex Branch, will be retiring in December and is stepping down from his long-standing role on the branch committee. He has been active in the HFMA both nationally – as a key member of the HFMA Environmental Sustainability Special Interest Group – and locally, where he was the regular host to the branch’s Introduction to finance sessions. Twice recognised with key contributor awards, Mr Smith is passionate about staff development.

Carol Potter Ms Potter has been an active supporter of HFMA for the past 20 years. She has held a number of senior finance posts in the NHS in Scotland culminating in her role as director of finance at Fife Health Board, where she is now chief executive. She was a prominent organiser of the ‘new profiles’ Scottish conference and an active member of the branch for many years. More recently Carol has represented Scotland on the HFMA board, stepping down in July.

David Bacon A member of HFMA since 1999, Mr Bacon has been chair of the Accounting and Standards Committee since 2010, where he has helped to steer the NHS through some significant accounting challenges. He has taken a lead role at the annual HFMA pre-accounts planning conferences, which are key events for supporting NHS members through detailed accounting changes, including the move from an accounting regime with quite detailed financial manuals, to one based on ‘principle-based’ accounting rules.

John Graham Mr Graham has been the cornerstone of the North West Branch for many years, helping it to move from strength to strength. He has been an informal mentor to new members and his leadership has underpinned an excellent programme of events year on year, consistently providing high quality technical and development sessions and conferences. Mr Graham was also chair of the national HFMA Costing Practitioners’ Groups and of the Healthcare Costing for Value Institute.

Scott Jarvis Mr Jarvis has recently retired from the NHS, where he was operational director of finance at University Hospitals of Derby and Burton NHS Foundation Trust. He has also stepped down as treasurer of the East Midland Branch, which nominated him for the fellowship – a role he held for nine years. Mr Jarvis also developed and led the branch’s senior finance leaders network, incorporating the technical issues group and the costing group into these quarterly events.

David Ellcock Mr Ellcock was nominated by the North West Branch for his work with the branch and his contribution to finance staff development locally and nationally. A major supporter of workforce development, Mr Ellcock was branch chairman for a number of years and was appointed programme director for Future-Focused Finance when it was created in 2013. FFF has produced a successful national programme that aims to support the improvement of NHS finance across a number of delivery themes and has led to the creation of a network of value makers. In August, Mr Ellcock left FFF to take up the role of director of the North West Skills Development Network. His fellowship recognises his support for staff development and his work with HFMA and FFF over many years.

Outstanding contribution awards recognise a specific contribution in a particular year such as undertaking a particular piece of research or organising a key event. Recipients receive a voucher that can be used on an HFMA programme or a contribution towards a study tour. This year’s award winners include:

Andy Ray Nominated by the HFMA Eastern Branch, Mr Ray has been an HFMA member since 1991 and is a six-year veteran of the branch committee. A major supporter of staff development, Mr Ray has promoted the use of the HFMA to support personal development among his team. He established formal links with the professional accountancy bodies, sponsoring a number of staff to obtain professional qualifications. The branch annual conference in 2019 attracted the highest number of attendees ever, with Mr Ray playing a major part to encourage attendance from both delegates and suppliers. An active member of the national Technical Issues Group, he is now taking on the chair of the Accounting and Standards Committee.

Simon Crowther Mr Crowther spent six years as chair of the HFMA East Midlands Branch, stepping down in November 2019 when he was invited to become an HFMA trustee. He was responsible for re-invigorating the annual branch conference, extending the event from one to two days with it now needing larger venues to accommodate demand. He has also built links with the local Future-Focused Finance and Skills Development Network and he continues to support the branch committee

John Hasson Mr Hasson was nominated by the Kent, Surrey and Sussex Branch for support of the branch. He has single-handedly organised an annual golf tournament for the last 16 years. This is now an integral part of the successful annual branch conference, providing an opportunity for members to network. He joined the branch committee in 2014.

Catherine Grant Skills development co-ordinator and HFMA Northern Branch administrator, Ms Grant has commissioned a three-day personal development programme for bands 2 to 4, ensuring junior staff get the same encouragement and development opportunities as senior staff. She has also taken an interest in a local procurement-to-pay implementation, both for her own development and to share solutions as part of the local finance Getting it Right First Time project.

Elizabeth Taylor (left) The Kent, Surrey and Sussex branch administrator was nominated by the branch for going the extra mile in support of the branch and its activities. An integral part of the branch committee, she has been instrumental in delivering successful branch conferences in successive years.

Sarah James The South West Branch has nominated its branch treasurer for a key contribution award to recognise how she has been ‘loyal, hardworking and extremely efficient in her role’ and to show the branch’s gratitude for her long standing position. 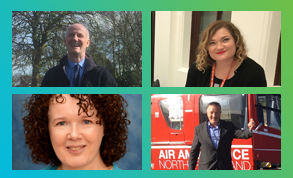 All four of the Northern Ireland branch members jointly organise the branch’s ‘patient client experience’ conference. This has led to a diverse programme covering topics such as: no health without mental health; teenagers affecting change; and dying, death and bereavement. The 2018 event also saw the introduction of a booklet style conference programme to replace the usual conference folder – an approach that has now been rolled out to all the branch’s events.

Two silver key contributor awards were also made to recognise continuing contributions to the association.

Ms Edwards and Ms Thompson continue to be active and enthusiastic members of the Northern Ireland branch committee. They organise the successful annual accounts workshop, creating a programme that caters for all finance staff including accounting standard updates, sessions from internal and external audit and a session from the Department of Health, Social Services and Public Safety. The event remains crucial for finance staff and is the branch’s most successful event other than the annual conference.

All the above awards will be presented at a key supporters’ dinner in July 2021. This year’s event was cancelled due to the coronavirus pandemic.