Working together on PPE (#DoingOurBit)

Working together on PPE (#DoingOurBit)

NHS procurement and finance have always been closely linked, but in many trusts Covid-19 has changed the relationship between staff working in the disciplines, with finance staff helping to manage the efforts on personal protective equipment (PPE), and pick or deliver supplies. At Leicestershire Partnership NHS Trust, finance and procurement are combined into a single department, but the procurement arm’s need for help during the crisis and the finance response has fostered closer ties and better relationships.

The trust provides mental health, learning disability and community services to more than 1 million people over 150 sites. As with its peers, Covid-19 meant it was suddenly faced with an explosion of demand for PPE. 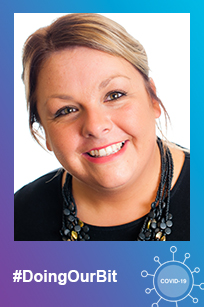 Head of procurement Sarah Holliehead (pictured) says the trust began to discuss its strategy in mid-March. At that point – like many parts of the NHS – managers did not fully understand the impact of the virus on the need for stock. But with demand rocketing, the trust soon realised it needed to strengthen its procurement and distribution system.

Her team set up a new system for PPE in five days. ‘My team said goodbye to their day jobs and started managing PPE,’ she says. ‘We set up spreadsheets and a stock management system and we had a lot of help from finance colleagues in terms of how to manage the data.’

The team analysed product use by department to get a grip on what was needed, where it was needed and how quickly it was used.

‘From the beginning, we tried to be proactive – we didn’t want to get to the point where people were worrying about PPE. We wanted to be in a position where we were pushing stock out to people, so they had it when they needed it,’ she says.

The PPE stock management system plays a vital role, particularly as guidance changes – for example, the recent rule change to require everyone in a hospital to wear a mask or the additional PPE needed as Leicester was placed in additional lockdown.

‘We made a lot of good relationships with people we didn’t normally talk to, getting an idea of their usage and to set up deliveries for them. But I am most proud of our volunteer drivers – people who work for the trust in other jobs and from outside the trust.’

Volunteers included finance staff. ‘People at all levels in finance have been delivering for me, picking and sitting in for me, as well as coming in when we needed help,’ Ms Holliehead says. 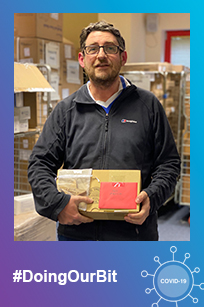 Ian Ferrin (pictured), the trust’s head of finance in its families, younger people and children (FYPC) clinical directorate, and Mandy Waldram, a management accountant in the FYPC team were two of the finance volunteers.

‘We had an email just before lockdown asking for volunteers to help pick and deliver PPE. We wanted to help our procurement colleagues so we stepped forward, Ms Waldram says.

Mr Ferrin adds: ‘From my perspective it’s difficult in finance. We know we are contributing but it’s difficult for us to demonstrate how we’re contributing. This is something we can do to show our direct contribution to the patient and staff health and wellbeing. It felt not necessarily like a duty, but something I really wanted to do to give something back.

‘It was also nice to help and gave us a good opportunity to get out of the house in the early days when it was complete lockdown.’

Both picked and delivered PPE during working hours, initially on Mondays, Wednesdays and Fridays, making up lost hours in their day jobs in the evenings and at weekends. ‘We didn’t want to neglect our finance tasks and on average we are now called on by procurement once or twice a week,’ Mr Ferrin says. 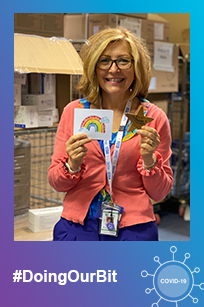 Ms Waldram (pictured) adds that her job often involves getting out to see frontline managers, so delivering PPE did not seem strange.

Sometimes the pair deliver together – Mr Ferrin has MS so Ms Waldram sometimes accompanies him. On other occasions he is joined by his son.

‘It’s fair to say that at the beginning PPE was a bit of an issue, but we delivered it as soon as we got it,’ Mr Ferrin says. ‘But Sarah and her team have done really well and put together monthly timetables, so we know when we are needed, and she knows when volunteers are available. The procurement team has been fantastic and made it a lot easier for us drivers to schedule time to do it and work around unavoidable work like month end.’

After a while, the drivers were given their own routes, strengthening the bond with the people they were delivering to, and hammering home the importance of the work they were carrying out. On one occasion, Ms Waldram and her son – who volunteered to help while on furlough – were delivering PPE to a mental health unit for older people. One of its wards had been assigned to Covid-19 patients.

‘When we arrived with boxes of PPE, the receptionist burst into tears,’ Ms Waldram says.

The strain and lack of certainty in those early days had led the receptionist to be overcome with emotion, but out of these difficult times new relationships have emerged. ‘They didn’t know if they were coming or going, but when we went back two days later it was like we were old friends.’

As they provide an enabling service, finance staff do not normally interact with other parts of the service. ‘This has made us more motivated to show we are part of the organisation and have our part to play.’

He adds: ‘I feel there is a lot better relationship and understanding of the people who work in procurement. I know what they do and the pressures they are under. It’s helped to see what each service does.’

Both are still giving up their time to help the PPE effort and, while keeping an eye on meeting current demand, Ms Holliehead is also looking to future-proof the trust’s PPE operation. ‘It’s not going to be a temporary thing. We are going to need PPE for a good few months and at least until the end of the financial year, if not way beyond that. We are ensuring we can react to any winter peaks. We have gained a lot of knowledge and insight over the last few months, so if and when another peak happens, we should be better prepared.’