Welcome to your new role as head of procurement (#DoingOurBit)

Welcome to your new role as head of procurement (#DoingOurBit)

As a mental health service provider, Kent and Medway NHS and Social Care Partnership Trust was historically a fairly minimal user of personal protective equipment (PPE). But that changed almost overnight with the outbreak of Covid-19.

And for deputy director of finance Victoria French, the change was accompanied by a transformation in her role and the creation of a stock warehouse in the finance offices. 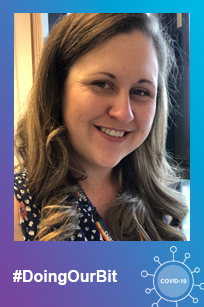 The trust delivers adult mental health services across 33 sites stretched over a big geographical area. It has three main hospital sites with about 22 wards between them and community teams serving multiple locality areas. Numbers of Covid-19 patients are obviously small compared with those in acute settings, but challenges are still significant.

The trust has seen up to 16 inpatients and 35 community patients at any one time across its various settings with a positive Covid-19 diagnosis. However, at one point there were six patients on a single secure locked facility, which provides specific challenges in terms of providing isolation to protect both patients and staff.

More recently the trust has opened a dedicated ward to take patients coming in from the community that are either confirmed or suspected of having the virus – and this has helped to alleviate the pressure on some other wards. PPE has clearly been a vital component in protecting patients and staff, but this was relatively uncharted territory for the trust.

Surgical masks provide an example of the dramatic change in volumes of PPE needed. Before Covid-19, the trust may have used seven boxes of masks a month, each containing 50 masks, says Mrs French. That is a small quantity when you consider the trust employs 3,500 staff and delivers services for a population of 1.8 million. Now it is getting through about 400 boxes a week.

So the trust has virtually had to start from scratch in setting up a logistics and supplier network. However, the pandemic also arrived at a time when the trust was in the middle of reforming its procurement team.

Mrs French has been in her role for nearly 18 months with responsibility for both procurement and payroll alongside oversight of the finance team. She says the procurement function, which has some transactional processing support from NHS Shared Business Services, was in need of investment. And a partnership arrangement had been put in place with a local acute trust to help develop the Kent and Medway team.

However, when Covid-19 hit, the procurement team effectively had just one member of staff, who had to isolate and work from home, and a new member who had joined just three months earlier. Meanwhile, understandably the acute trust partner was firmly focused on its own procurement challenges. ‘It was effectively – welcome to your new role as head of procurement,’ says Mrs French.

A number of finance staff have been converted to procurement roles, with those shielding or working from home focusing on continuing finance responsibilities such as budgets and the annual accounts. Impressively, the trust has continued to meet its original deadlines in these areas. Just six of a total 23 finance staff remain in the office, with the remainder working from home. Two of these are working full time on procurement, two split their time between finance and procurement and two are focused on the annual accounts process. 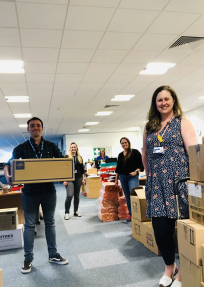 Some financial duties have reduced – for example budget or business case meetings with frontline staff. But this is not enough to allow for the extra time being spent on procurement and supplies, which is a seven-day a week activity, and so the team are working extra hours to support the overall trust response.

The trust may have been making a standing start in sourcing PPE, but it made rapid progress.

‘In one week we converted the finance offices into a warehouse and we linked up with the national team for all push stock,’ she says. ‘Then by the end of the second week, we had established a logistics network.’ There were some hiccups initially. For example, the trust discovered that first deliveries from the national supply chain were being sent to its procurement partnering trust. This meant numerous 10-mile car trips to get the stock on site, before it could be distributed around the trust’s 33 sites and 66 different buildings.

‘Initially there was a lot of reacting to situations, but now in week five, there are three clear roles in the team’s structure,’ says Ms French. ‘There is the “head office”, which is me and my procurement coordinator. Our job is primarily to source new suppliers.’

Distribution is taken care of by a team of seven volunteer drivers, supplemented by team members who undertake urgent deliveries of supplies as part of their commute home. With an area covering 100 miles from top to bottom, drivers are putting in significant mileage. And images of Mrs French with her car full of PPE make a regular appearance on Twitter.

The final role is stock control, run by finance team members plus further volunteers from contracts and information governance teams. This team works on a shift basis covering the whole week managing stock in the ‘warehouse’ – logging what is in stock, receiving deliveries and responding to urgent requests.

‘It has been a massive learning curve,’ says Mrs French. ‘Probably the biggest challenge was simply getting hold of the stock when you have no supply route and no suppliers in place. At the beginning we didn’t know what we were buying. That was the real “oh my goodness” moment.’

Not only did the trust not have contracts with local suppliers, it wasn’t on the radar of those suppliers. Even now the trust has had to partner with another trust to get some supplies as the quantities it needs aren’t big enough (currently) for the supplier to deal with it separately.

Mrs French says there is a huge buzz about the operation and a great sense of camaraderie across the team working on procurement, across the trust generally and with colleagues in other NHS bodies. She says it has also helpfully boosted the profile of the procurement function.

‘We relaunched our procurement function in October and we were already trying to get people’s attention in the organisation,’ she says. ‘Now there is no doubt that people recognise the value the function is adding. Hopefully this provides a good platform to get our final roles recruited and to ensure we maintain those networks.’