Personal protective equipment or PPE has consistently been in the headlines during the Covid-19 pandemic as journalists and commentators asked, do we have enough of it; is it being delivered on time; is it of sufficient quality? A range of national actions have been taken on supply and quality of PPE, but, faced with a very real shortage of gowns early in the pandemic, managers at Northumbria Healthcare NHS Foundation Trust took matters into their own hands.

Director of finance Paul Dunn (pictured below with local MP Anne-Marie Trevelyan) says rapid action was needed when it was discovered there were virtually no gowns in the trust’s central store. ‘We had about 30 gowns and we use around 500 a day. We were in dire straits in terms of surgical and isolation gowns.’

Polypropylene isolation gowns are water repellent and used in ‘day-to-day’ care to protect staff. Surgical gowns, as suggested by the name, are used in theatres, and provide a higher degree of protection than isolation gowns.

Paul Price, the trust’s head of commercial, praises Mr Dunn for stepping in to ensure the initial holes in stock were filled by local businesses. As well as taking their surplus stock, the trust created a virtual network of machinists – trust staff who previously worked in the textile industry, who sewed gowns at home, and employees of local businesses.

The initial challenge was overcome, but the trust decided it could not risk such a shortage again. It set out to become self-sufficient, and to help other trusts in the region and nationally. Its first gowns were produced on 10 April through its virtual network, and it had made 1.1 million by June. 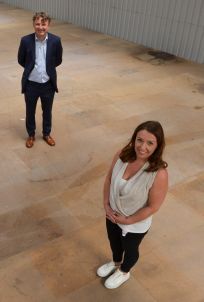 Mr Dunn and Mr Price say support from Sarah Rose, who has 27 years’ industry experience, was invaluable. She volunteered her experience and expertise and, with her help and contacts, the trust (via its subsidiary Northumbria Healthcare Facilities Management) opened a factory in May. It has now moved into a new factory near its Cramlington site (close to its dedicated emergency care hospital).

The new factory has more than 20 machinists and, across the trust’s network of producers, there are plans to produce 2.2 million gowns in the first six months. The trust now requests no isolation gowns from the national supply chain. Being self-sufficient has allowed it to provide isolation gowns to local trusts and to those further afield. While focusing on isolation gowns currently, in the long term the enterprise is planning to open up a new line to produce surgical gowns.

Ms Rose (pictured above with Mr Dunn) says the gowns it produces meet with Health and Safety Executive standards, though these standards have changed several times in the last few months. ‘We have been getting testing done and made sure our gowns are compliant, only then to find out the standards have changed. Even so, all our gowns have complied with HSE regulations,’ she adds.

Mr Dunn adds: ‘Our infection control teams have signed off the gowns and they are a step up in quality.’

Mr Price (pictured) says that the trust takes seriously its role in the local economy, through its use of the ‘Crown pound’ – trying as much as possible to employ local people and use local suppliers to ensure public funding boosts the local economy. Though it does import some materials from outside the north east, it tries to use UK suppliers before looking abroad.

‘Our chief executive Jim Mackey is a big believer in doing things differently, if there is a better way to do it. Initially, this was about keeping our staff safe; now we can also make an impact on our local economy,’ Mr Price says.

He hopes the factory will make a national impact, providing gowns for the national supply chain. ‘We know we can ramp up production and delivery, so staff are safe, and patients feel comfortable in the clinical setting they find themselves in,’ he adds.