‘I wanted to do something to support the trust’s response to Covid, and at the time it seemed like there was going to be a national crisis,’ he says. ‘At the same time, with the changes to the funding arrangements for the NHS it initially seemed like my job was going to be simplified. There would be fewer income tracks as they would effectively go into one contract. 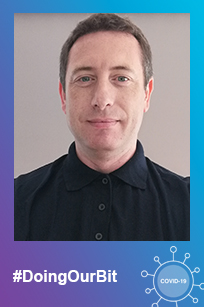 ‘Though it’s turned out not to be quite as simple as this, initially it seemed as though I would have spare capacity to help out elsewhere.’

The trust had issued a call to action for volunteers to join its redeployment scheme and he wanted to help.

‘I spoke to my line managers and they were supportive and happy for me to volunteer.’

Redeployment meant a big change – he went from working from home as part of the finance team to working shifts on a mental health ward at the trust’s Rathbone Rehabilitation Centre, which treats patients with chronic psychosis. He spent about four weeks working at the centre, from mid-May to mid-June.

The centre aims to support patients to gain independence, but during the lockdown its aim shifted to keeping patients safe and their conditions stable. Some of the centre’s 28 patients also contracted the virus over the course of his time there.

The staff welcomed him immediately as part of the team. Some of his duties included ensuring patients had not absconded and were safe and well – in the building or garden. This included checking for smoking and drug use. At the Rathbone, the frequency of the checks depends on each patient’s risk level, rated as levels 1 to 4. At level 1, patients are checked every hour, but this is more frequent as the risk level increases.

Mr Williams (pictured) also performed general duties, such as plating up food. He worked as an occupational therapist assistant, taking patients for walks around the local area and helping them to bake cakes, for example.

‘I enjoyed interacting with the patients. They all had really interesting stories and were quite happy to talk. They made me laugh every day. I had not done similar work before, but I am used to being around people with mental health disorders. I had a two-day professional safety course years ago, but I did a concentrated half-day course before I went to the centre.’

Wearing personal protective equipment while at the centre was strange, but he would volunteer again. ‘They asked me to go on the bank when I’d finished my four weeks there. Since I’ve gone back to my normal work in finance I haven’t had a chance to do it, but I would consider it.’

He adds: ‘I learnt a lot there. My role as an income accountant is removed from the service, though in my previous role as a management accountant I was closer to the coal face. I learnt how difficult it is to get the staffing levels right – one minute everything is quiet and stable, and it might seem that there are more than enough staff. But that can change very suddenly – it highlighted how difficult that must be.’