Over recent years, when a trust broke even it seemed like a time for celebration. But breaking even at one trust – bringing it out of financial special measures in the process – and, in the same year, delivering the biggest surplus recorded at another trust must surely be acknowledged nationally.

And so it has been this year. Having achieved these milestones at both trusts, Karen Geoghegan (pictured) was named HFMA Finance Director of the Year 2019. 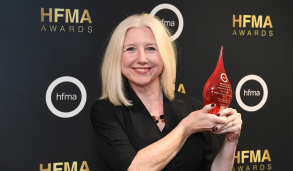 She joined the Western Sussex trust in 2014 as chief financial officer – a role that was extended to the Brighton trust in 2017.

On taking the job at the former, her brief was to deliver a sustainable financial position. She set about this with purpose, introducing a programme management office to assure and oversee the delivery of the trust’s efficiency programme. It was a move that has led to the delivery of recurrent efficiencies of 4% a year over five years.

Ms Geoghegan also implemented a capital prioritisation system, which takes account of financial discipline and an appreciation of operational pressures. It is evidence-based, has multidisciplinary input and is linked to the trust’s strategic themes.

In 2018/19, the trust achieved its largest ever control total surplus of £28.5m and, using this surplus, the trust is now investing in its clinical estate plan.

Together with executive colleagues from the trust, Ms Geoghegan joined the Brighton and Sussex trust in 2017, which was in financial special measures and had a £69m budget deficit. She quickly identified that the trust could influence £31m (52%) of its 2016/17 deficit and, under her guidance, it made savings of £20m in 2017/18 and £30m in 2018/19. Control totals were achieved in both years and the trust is on track to do the same in 2019/20.

The trust came out of finance special measures in July 2018 and work was completed on a medium-term financial plan, which detailed the trust’s underlying financial position and articulated to regulators the need for continued financial improvement.

The improved financial position supported the trust’s bid for capital investment in its emergency department to improve patient flow and address estates risks. The trust secured £49m for these projects.

Ms Geoghegan paid tribute to her finance colleagues at the trusts. ‘I am thrilled. I feel so blessed to have a brilliant finance team at both Western Sussex and Brighton and I couldn’t do it without them. We have been through some real challenges at Brighton, but the hard work and focus of the team made it so much easier.’

She also thanked her board. ‘The executive team is amazing. Financial responsibility is shared. We have a good culture of ownership of improving our financial performance across the exec team. Having someone like Maggie [Davies, HFMA clinician award winner – see page 13] shows how our clinicians are engaged in the finance agenda.’

She has also shown leadership at system level. The Western Sussex trust has introduced an aligned incentives contract with its main commissioner, Coastal West Sussex Clinical Commissioning Group. This is usually implemented to help a provider in difficulty, but has been used to support a commissioner in deficit. The contract has helped the local health economy return to a surplus position in 2019/20 without the need for external support, and reduced financial risk by £37m.

‘It’s all about the relationships – whether it’s clinical colleagues, commissioning colleagues or the executive team,’ Ms Geoghegan said. ‘If you treat people well and have trust between you, you can achieve some amazing things.’

The judges said that, while all the candidates should be acknowledged, Ms Geoghegan stood out in a talented field. ‘She has demonstrated the values and professional leadership you would expect, on a consistent basis over a number of years, playing a significant part as a respected member of their board, in not one but two organisations, while at the same time inspiring finance teams with her positive and values-based leadership style.

‘However, the standout reason for Karen being acknowledged as finance director of
the year by her peers is the major contribution she has made to delivering significant improvements both in the finance function and in the healthcare system in which she works.’

Sally May is the finance director of two trusts – the Royal Cornwall Hospitals NHS Trust and Cornwall Partnership NHS Foundation Trust. Although the trusts have different challenges, Ms May manages to deliver financially year-on-year at both with minimal fuss. Her greatest assets, however, are her values and commitment to teamworking, breeding confidence in the finance teams and providing the direction they need. She has managed challenges – such as a divisional restructure at the Royal Cornwall and changing executives – and has supported her teams, ensuring they have time for development despite the workload. Ms May has also made the time to help operational colleagues.

Hardev Virdee, who was previously at Central and North West London (CNWL) NHS Foundation Trust (now at Barts Health NHS Trust), is a people person who, although still young, has made significant achievements. During his three years at CNWL, he transformed the finance team into a joined-up, well-oiled machine and delivered on finance expectations. An approachable leader, Mr Virdee ensured that he met every member of the finance department twice a year and new joiners in their first week. He contributes to the national and regional agenda – he is a national leader on diversity, heads the London finance talent board, and sits on the HFMA Mental Health Finance Faculty.

Stephen Sutcliffe is responsible for a team of 1,500 who provide finance and accounting services to around 300 NHS organisations, including 70 trusts and every clinical commissioning group. As director of finance and accounting at NHS Shared Business Services (SBS), he leads the largest finance department in the NHS and, over the past year, has improved both the net promoter score – used to gauge NHS SBS customer loyalty – and great place to work measures. Mr Sutcliffe has embraced technologies such as robotic process automation – a year after the first finance and accounting robot was deployed, 45 work routinely across 300 NHS finance departments, saving an estimated 200,000 working hours.