Covid-19 will demand different approaches are taken across the globe to a range of issues including how patient flows are handled, how backlogs are dealt with and the use of technology, the HFMA conference was told.

Mark Britnell, chairman and partner of KPMG (pictured with HFMA president Caroline Clarke), said work with large numbers of international health systems this year had revealed there were clear trends on what had worked in facing up to the Covid-19 pandemic. Most countries had moved quickly to the use of digital technology and much of this would stay in place. ‘If you haven’t got a digital front door, then you haven’t got a digital strategy,’ he said. 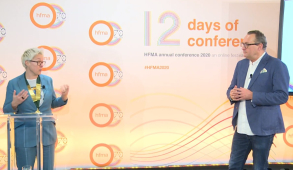 He suggested that in the first phase, the switch away from face-to-face consultations had meant around 85% of contacts were undertaken virtually. ‘In the second phase, it seems to have found a more natural level of 40%-45% and that is the range we are currently seeing in the NHS,’ he added.

There were numerous international examples of technology being adopted more quickly. Italy had made significant moves to support more care at home through direct monitoring of patients using wearable technology. Canada had made progress with cloud-based care records. In general, the digital programme had been accelerated and Mr Britnell said health systems now needed to build on this.

He said views were also changing on the levels of capacity and the split between hot and cold facilities needed to allow systems to cope with future pandemics. Eliminating the backlog that had built-up in many systems would take years. With the UK’s traditionally high levels of occupancy, Mr Britnell suggested that tackling the backlog would be likely to require significant use of independent sector capacity and moves away from simple spot purchasing.

He also suggested that there was a growing recognition of the importance of having the right number of qualified staff, which could lead to competition for healthcare professionals. ‘By now, every country knows that actually a well-staffed health service is a value not a cost,’ he said. ‘And the quickest way to get your economy up and running is to have a well-motivated, well-cared-for group of staff that can help their nation get back on its feet. And we are not the only nation thinking about that. So we will see a lot of countries go back into the international recruitment market.’

However, he acknowledged that services may also have to deal with staff leaving post-pandemic, exhausted from their experiences this year. While the external employment market might act against this, staff departures and retirements were a real possibility. He advised leaders to stay close to their staff, show that they are taking their concerns seriously and be open to staff proposals for flexible working.

He also predicted that major health systems would have command centres by 2025. The centres, which are already in place in Australia, Canada and the US, would operate ‘like air traffic control towers’ for a city or region, monitoring in real time critical flows of patients, supplies, information and care pathways. He suggested this was almost the start of ‘AI supported big data working on a day-by-day basis’. ‘It is the next frontier for hospital management in my opinion,’ he said.

Asked if there were any implications for payment systems arising from the pandemic, Mr Britnell argued that fee for service approaches had not fared well. In the US, the payment model had led to a loss of income for healthcare providers as non-Covid activity stopped, leading to staff being laid off. He said organisations faced significant financial distress, leading to a new wave of mergers and acquisitions.

In the UK, he said a blended approach made sense, but he said he would not move entirely away from the use of activity-based payment – especially with the need to tackle the backlog.