Darrell Tobin is good with big data, which makes him useful working with the increasingly big data sets involved with patient-level costing data and analysis at East Lancashire Hospitals NHS Trust. But these skills also came into their own as part of the trust’s initial response to Covid-19 as he applied them to forecasting the likely impact of the virus on the trust. ​

‘The first thing we needed to understand when I moved across to support the modelling work was the behaviour of the virus,’ says the trust’s costing consultant (pictured). ‘We didn’t have a lot of data in the UK at the outset as the virus hadn’t progressed that much. But I downloaded all the international statistics from the European Centre for Disease Prevention and Control (ECDC) and I analysed the top 10 countries, mainly from the EU – countries that were slightly ahead of us in suppression measures. And I looked at the linear regression of movement to predict what would happen in the UK. I then applied this metric to the local data.’ 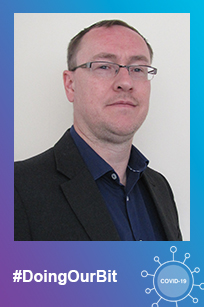 The conclusion was that the trust had enough capacity – including oxygenated intensive care unit (ICU) capacity – to cope with the likely peak demand.

The trust still prepared for a worst-case scenario, following NHS England guidance for increasing ICU capacity. However, the analysis gave the trust confidence that it would not be over-run and the actual numbers it has seen have followed the local forecast very closely.

Mr Tobin also applied his skills to support the restart of wider services, which had been stopped or reduced during the initial response. This is helping the trust to understand what capacity it might need to start addressing the backlog created by significantly reduced elective activity for nearly three months. And he developed a heat map showing hot spots in local care home provision.

‘It’s one of the most challenging things I’ve done,’ admitted Mr Tobin, who studied statistics as part of his psychology degree and specialised in automation and the use of Microsoft SQL server in a previous private sector role. ‘This was effectively international pandemic modelling! I’ve never done anything on this scale and I was even able to point out some corrections to data held by the ECDC.’

The 45-strong finance team moved to home working more or less overnight at the outset of the pandemic and staff were asked to volunteer for different ways to support the frontline response. For Abbie O’Malley (pictured), senior finance officer, the choice was simple. Alongside her full-time finance role, she has worked Saturdays in the accident and emergency department for the last eight years as part of the patient services team. 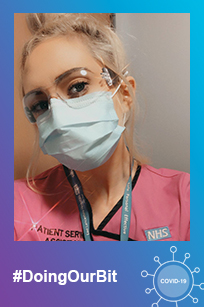 With the Covid-19 outbreak, it seemed obvious that she should respond to the department’s call for extra support. ‘I felt like I had to do something to help and I was used to the role,’ she says. Even so, she says the first couple of weeks of eight-hour shifts (six days a week) were pretty exhausting, with a detailed process for daily laundering of clothes and uniform also eating into evenings.

One of her main duties involved performing terminal cleans on rooms where consultations had been undertaken with Covid-positive or suspected Covid patients. This would take about 45 minutes to complete and could only commence after the room had been left unused for 20 minutes.

However, she also spent a lot of time accompanying patients to get their chest X-rays, a key diagnostic used to identify Covid-19. Again, because of the unique context provided by Covid-19, patients could not simply be left at or directed to the X-ray department, but had to be accompanied at all times, making this a time-consuming duty.

Speaking to the patients was a key part of the role. ‘As part of patient services, we often get more interactions with patients because the nurses and healthcare assistants are so busy,’ she says. ‘So we can have more general chat with them and make sure they are alright. And that is a part of the job I love.’

After four weeks in A&E, with patient numbers stabilising and new staff joining, Ms O’Malley was able to return to her finance role. Getting a more detailed insight into patient care has been a good add-on to Ms O’Malley’s day job, where she has studied for her AAT qualification. However, she has been so taken with getting closer to the clinical side of working in the NHS that she is planning to retrain as a midwife, starting early next year.

Julie Walmsley (pictured) is another member of the finance team who was redeployed to support the trust’s frontline as it rose to the Covid challenge. Ms Walmsley is divisional accountant for the trust’s family care division and, once the final accounts were submitted, she moved across to support the obstetrics and gynaecology department in an operational role. 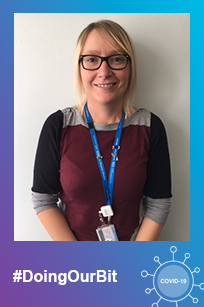 ‘While core maternity services obviously kept running, a lot of the gynaecology activity had come to a halt,’ says Ms Walmsley. A lot of this was because a number of gynaecology patients are elderly but also a few consultants were themselves required to shield. ‘We needed to get a plan together to restore services,’ she says.

There is a significant backlog. The trust needs to work through referrals that are still in the system – pre-Covid referrals of around 360 per week fell to around 200 during April and May. But there is also expected to be an increase in referrals where people have delayed seeing their GPs.

The team has been working with clinicians to review who needs to be seen urgently and whether a face-to-face appointment is needed or where a virtual consultation might be appropriate.

Ms Walmsley says the work was really enjoyable, getting a detailed insight into the role of business managers and the pressures they face. However, she says it was tough keeping on top of her finance responsibilities as well and has now been formally pulled back into finance.

Trust deputy finance director Charlotte Henson says that at least a dozen members of the 45-strong finance team were redeployed to other roles and activities during the trust’s initial Covid response. Other team members helped delivering meals to wards, with mask fit testing, in procurement, in administration, or by taking on additional shifts on the senior managers on-call rota.

The team is now all back together, albeit still working from home. ‘We are 100% busy,’ she says. ‘Despite the suspension of normal contracting, it feels busier than ever with the monitoring of Covid spend, capital bids and opening further critical care beds.’

The finance team continues to support divisional business managers and clinical teams and there is an increasing focus on the trust’s improvement progamme, including a review of its outpatient transformation porgramme. She says the team’s attitude throughout has been one of ‘how can we help?’ And that will continue as the department looks to find the right balance between home and office working in the future.