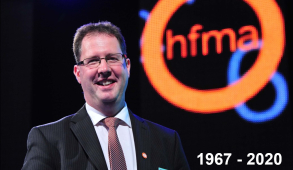 ‘Last week we lost a valued former colleague,’ Mr Knight said. ‘He was a great supporter of the association and in 2018 he was awarded an honorary fellowship in recognition of that. The HFMA sends its deepest condolences to Paul’s family and friends at this sad time.’

HFMA members and former colleagues of Mr Briddock took to the virtual event’s chat box to pass on their sympathy.

Jane Tomkinson wrote: ‘Heart breaking that such a valued and cherished friend and colleague in Paul Briddock is no longer part of the NHS finance community. Sorely missed.’

Andy Ray added: ‘Very sad news. Paul was a great NHS and HFMA supporter, as well as a great person. Will be missed. RIP Paul.’

Past presidents of the HFMA added their condolences. Mark Orchard wrote: ‘Such sad news to hear that we have lost Paul. He was such a good man, and a great colleague. He will be hugely missed.’

And Phil Taylor added: ‘Paul made a very significant contribution to the HFMA and was a good friend to many of us. It is very sad and he will be greatly missed.’