The week was dominated by the encouraging news that the world is a step closer to an effective Covid-19 vaccine, while there were further expansions announced for the UK testing programme including a plan to get students home for Christmas.

Publishing positive efficacy results from phase three studies of their potential vaccine, Pfizer and BioNTech said the vaccine had been found to be more than 90% effective in preventing Covid-19. The tests involved 43,000 volunteers, half of which got the vaccine and half got a placebo.

More safety data is needed – although this is expected to be available by the third week in November – alongside data showing it can be consistently manufactured, at which point the vaccine can be put forward for regulatory approval.

The company has indicated that it may be able to supply 50 million doses by the end of this year and 1.3 billion by the end of 2021, with the UK receiving 10 million of this year’s supply and 30 million to follow. Each person vaccinated needs two doses.

Health secretary Matt Hancock urged caution when he addressed the House of Commons on Tuesday. ‘We do not have the vaccine yet, but we are one step closer,’ he said, urging people to continue to abide by social distancing rules.

And he said that there were still uncertainties. ‘Until it is rolled out, we will not know how long its effect lasts, or its impact not just on keeping people safe but on reducing transmission.’ However, Mr Hancock (pictured) confirmed that this would be an adult vaccine for the adult population.  ‘The vaccine will not be used for children,’ he said. ‘It has not been tested on children. The reason is that the likelihood of children having significant detriment if they catch Covid-19 is very, very low.’ Prioritisation would be in line with the interim advice published by the Joint Committee on Vaccination and Immunisation published in September, with age and working in health and social care being the prime risk factors.

There have been calls for the government to use the current lockdown in England to improve the performance of the NHS Test and Trace service. Last week, interim executive chair of the National Institute for Health Protection Dido Harding told the CBI annual conference that the improvement work fell into four areas. These included: increasing the scale of the testing programme; better contact tracing; working together with the public and private sectors; and making better use of the data collected to help stop the spread of the virus.

Some of this upscaling got underway this week with 600,000 lateral flow tests sent out to local public health leaders to support the expansion of asymptomatic testing. More than 50 public health directors have each been sent 10,000 test devices to start testing priority groups. The initial batch of 600,000 will be followed up with a weekly allocation of the tests.

And in a further development, NHS England announced that it was starting the roll-out of asymptomatic testing of patient-facing NHS staff this week, starting with 34 trusts benefitting more than 250,000 staff. A letter from NHS medical director Stephen Powis(pictured) said that this would build on testing already occurring in areas worst affected by the virus, where over 70,000 staff had been tested in recent days.

‘NHS trusts should continue to use their own PCR [polymerase chain reaction] laboratory capacity for appropriate staff testing, and increasing amounts of LAMP [loop-mediated isothermal amplification] saliva testing will be made available to hospitals by Test and Trace in November and December,’ the letter said. The move comes just a week after a Department of Health and Social Care letter to the Commons Health and Social Care Committee had suggested routine testing of staff would not start until December, prompting committee chair Jeremy Hunt (pictured) to call for the programme to be brought forward. The committee had formally called for routine testing of staff in its October report on Delivering core NHS and care services during the pandemic and beyond. Mr Hunt, a former health secretary himself, welcomed the decision for an earlier start, but reminded the current health secretary and NHS England chief executive Simon Stevens that the committee was still waiting for responses to its other recommendations. These covered communications with the public, waiting times, workforce well-being and future use of the independent sector.

Having missed the committee’s October deadline, Mr Hunt asked for a response by Monday.

Tackling the waiting list was also on the mind of The Health Foundation this week as it unveiled a ‘potential hidden backlog’ of unmet care needs. Its analysis found there were 4.7 million fewer people referred for routine hospital care such as hip, knee and cataract surgery between January and August this year.

It said this drop in demand was unlikely to be because need had disappeared and was likely to be due to GPs unable to refer to suspended services and patients being reluctant to seek care during the pandemic. This hidden backlog would need to be planned for alongside the more than 4 million people already on the routine elective care list. (see Concern over hidden elective demand).

Older people – those over 50-years-old – are likely to feature heavily both in the known waiting list and any hidden backlog. A new report for the Institute for Fiscal Studies claimed that a sixth of older people had hospital treatment cancelled in the early stages of the pandemic, while an additional one in 10 were unable to access primary care. Covid-19 and disruptions to the health and social care of older people in England also said the burden of disruptions had fallen disproportionately on those living in the most deprived areas and those with worse underlying health.

Although trusts have been pursuing the restoration of normal levels of services alongside Covid-19 care, some trusts have recently been forced to pause elective activity once again because of high numbers of coronavirus admissions. And there are concerns that the second wave of the virus could have a much broader impact on the service’s recovery efforts. However, NHS Providers chief executive Chris Hopson said that the latest combined performance data from NHS England and NHS Improvement, published on Thursday, said there was ‘real evidence’ of the NHS responding in difficult circumstances.

‘Despite dealing with the second wave of the virus, trusts managed to meet the ambitious target for routine planned operations in September, reaching 80% of last year’s levels,’ he said. ‘That’s an extraordinary achievement.’ However, Mr Hopson acknowledged it was worrying to see the number of people waiting longer than 12 hours in emergency departments before being admitted was beginning to rise.

And there were also reports that nearly 140,000 of the 4.35 million on the waiting list at the end of September had waited over a year. This compares with just under 1,500 at the end of last year.

Back in the world of testing and contact tracing, the weekly update on NHS Test and Trace reported that nearly 142,000 people were transferred to the tracing system in the week to 4 November. Some 85% of these were reached, meaning that more than 20,000 people were not contacted. Nearly 100,000 of the 121,000 that were reached provided details of 315,000 close contacts, with 11,000 of these linked to outbreaks in specific settings such as care homes, schools and prisons and managed by local health protection teams. To give an idea of the increased pressure facing the service, the number of contacts handled centrally was more than 12 times higher than at the end of August. In total 60% of all these contacts were reached.

More than one in three results for in-person tests undertaken in the community (pillar 2) were received within 24 hours, compared with 26% in the previous week and the percentage hitting this standard for tests using all routes rose to 19% compared with 13% previously.

Saffron Cordery, deputy chief executive at NHS Providers, said that the more than 124,000 close contacts not reached highlighted how far the system had to go to be effective. And NHS Confederation director Layla McCay said it was vital that the remaining time during lockdown was used to make progress. ‘We are about to enter the second week of the lockdown, which means there are only three weeks left, and our members have told us they have major concerns about capacity as winter looms,’ she said. ‘The clock is very much ticking.’

Reducing the number of weekly infections during lockdown would ease the pressure on NHS Test and Trace and enable it to be more effective. But there have also been calls for greater involvement of local public health teams.

In addition to handling contact tracing in outbreak situations, councils pick up cases when the national service has been unable to contact someone within 24 hours. Calderdale Council launched its service in mid-August and says the ability to cross-reference contact details with other local information and to go door-to-door, asking people to self-isolate but also helping people to access support if needed, has been vital. The Local Government Association has published a series of case studies on local contact tracing operations including Calderdale.

Calderdale’s director of public health Debs Harkins told BBC Newsnight this week that the council has seen the number of cases contacted rise from around 67% to 95% as a result. ‘We need to use this time [during lockdown] to really integrate the local and national elements of test and trace – that is the most important thing, that they work much more seamlessly.’ However, she said the eligibility criteria to access the £500 support grant on offer to those facing hardship due to self-isolation should be reviewed as too few applicants were being successful. 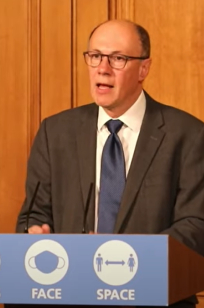 The week drew to a close with news on Thursday of a major hike in the daily reported Covid-19 infections – up to 33,470 from under 23,000 the day before. Speaking at the Downing Street press briefing, NHS medical director Professor Powis (pictured) underlined the importance of looking across a number of days rather than focusing on one particular day – the 7-day rolling average was just over 22,000 – and it was important to look at other data too, such as that provided by the ONS and the React data sets, which were unaffected by the numbers coming forward for testing.

However, it is a reminder of the seriousness of the current situation. Professor Powis said the news of a potential Covid vaccine was extremely encouraging and getting it so rapidly to this point of its development was an ‘unprecedented achievement’. ‘There is hope on the horizon, but the vaccine is not here yet and it will not help us in this second wave if infections continue to rise,’ he said. He urged the public not to stop now in terms of observing social distancing rules and lockdown measures.