Working alongside clinical colleagues is becoming second nature for many NHS accountants, but during the Covid-19 pandemic many are experiencing frontline work first-hand. Richard Gault spent more than six weeks on a Covid ward, helping where he could with administrative and other support tasks. And, though it was a profound experience, he speaks of his contribution humbly, almost matter-of-factly.

Mr Gault (pictured), a band 5 finance analyst at Northern Health and Social Care Trust in Northern Ireland, normally looks after the trust’s community services budgets. But when his employers asked for volunteers to mitigate the risk of ward staff falling ill, he was among the first to put up his hand. 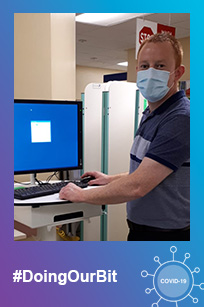 He volunteered to work as a ward clerk at the Causeway Hospital in Coleraine and was assigned to Medical Ward 2, which is part of the hospital’s medical assessment unit. He started on 24 March, but with admissions rising it soon became the hospital’s Covid ward due to having a higher number of side rooms that could be used for isolation.

‘I went from working with calculators and spreadsheets to patients’ notes,’ he says. ‘It was a big change. I’m unaccustomed to working with acute staff, though I am now pencilled in to do some budgetary system training with my new ward sister friends.’

Mr Gault, who has worked at the trust and its predecessors for almost 17 years, says he volunteered to go to the Causeway Hospital as it was closer to his home than the health board’s other acute hospital in Antrim, and he already knew some of the staff there. A small number of colleagues volunteered – it was a necessarily restrictive process, with the board wishing to keep employees and their families safe by asking those with underlying conditions or with vulnerable people at home not to come forward.

Though he did not have to wear full personal protection equipment (PPE), the face masks were uncomfortable. The duties were varied. As well as tracing and filing patient notes in a timely manner to help the clinical team, he was also charged with ensuring relatives’ contact details were up to date. Sometimes he would meet patients’ relatives – who could not, of course, enter the ward – in the hospital to collect clean clothes for patients on his ward.

Cleaning was also vital – wiping down notes trolleys several times a day, and cleaning work surfaces regularly were crucial to infection control. His induction training helped him know the extent of cleaning needed, but he also took the lead from the nurses and other staff.

‘You could find yourself doing anything. As I am a band 5 and went to do the work of a band 2 or 3, I felt I needed to justify my pay grade. I did as much as I could. One day I was making a birthday card for Captain Tom, then I was carrying out ward duties.

‘Social distancing doesn’t really work in a hospital setting. At a nursing station you might have 16 people around you. So, it’s really about putting your trust in people.’

His time at the hospital has given him a new appreciation of how and why funds are spent. ‘The cost of PPE etcetera doesn’t come into it. If it’s needed, it’s needed – these things are activity based.

‘Working in financial management, I’m not used to dealing with patients and with it being a local hospital you see familiar faces and names – family friends and others I knew had Covid. If they passed away it would be hard to deal with. It was not until I was finished there, and I took a week off, that it hit home. It doesn’t feel tough when you’re doing it, but afterwards it was a big deal.’

He talks glowingly of the staff on the ward, particularly the resilience and ingenuity of the nurses wearing PPE for long periods as they monitored patients in their bays of up to six beds.

To save PPE, nurses stayed in the bay during their shifts, writing down patient observations on paper and showing these at a window. A nurse on the other side of the window was then able to write this information into the patients’ notes. Nurse also made use of video baby monitors to keep a close eye on patients. 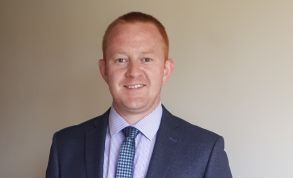 The kindness of the public was overwhelming, he adds. ‘They delivered water, toiletries, food, which really helped the staff on the ward because they had to think less about what they wanted to eat when they got home.’

The toiletries were welcome, with soap and hot water critical to reducing the spread of the virus. He finished his stint on 7 May and is not missing the daily routine of changing clothes before leaving hospital, and, on arriving home, washing his clothes and showering. ‘It could be three-quarters of an hour before you could sit down and relax. I’m pleased to no longer have to do this.’

The experience has given him food for thought and an even greater appreciation of the work done for patients.

‘It opened my eyes to things I never thought of – how they look after a dementia patient with Covid-19 who wants to wander about so they are an infection risk, or who pull out their cannulas, for example.’

It also showed him the importance of staff who are rarely hailed as NHS heroes. ‘I don’t think we hear enough about the domestics and catering staff. They are important in keeping patients hydrated and they are doing more than they would normally do. Admin staff can be overlooked, but they are vital and, if there is a second wave, I will certainly be volunteering to go back.’