Keeping information flowing between local NHS bodies and the national teams and government is vital for the service to make a coordinated response to the Covid-19 pandemic. And David Ellcock, programme director for Future-Focused Finance, is at the heart of making this happen.

Mr Ellcock has for the past five weeks been working shifts with the North West Covid-19 Incident Co-ordination Centre (ICC) – one of seven regional centres reporting into the national ICC. Mr Ellcock had already trained as a voluntary reservist to provide support as needed for the North West Emergency Preparedness, Resilience and Response team as part of preparations for a possible no-deal Brexit last year. 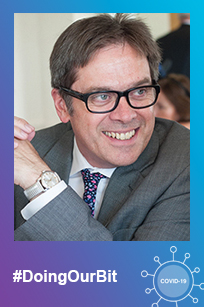 However, the ICC team needed to scale up its response team in the face of the Covid-19 pandemic. And this coincided with FFF’s finance staff development role being temporarily stood down while the service focused on the coronavirus. This led to Mr Ellcock being asked to move across to the ICC team to provide sessional support.

The team runs two shifts a day, keeping the ICC operating from 7.30am to 8.30pm. There are five key roles in each shift: the overall EPRR manager; an incident manager; a single point of contact (SPOC); a task manager; and an administrator. The unit helps to co-ordinate a system response to challenges across the region. For example, it could help trusts to help each other where one has a particular shortfall, whether in staffing or equipment.

‘However information gathering is a huge part of what we are doing,’ says Mr Ellcock. This is a two-way information flow. So the ICC channels numerous situation reports (sitreps) throughout the day to the centre, some of which ensure that national figures reported at the government’s daily public and press briefings are up to date on a daily basis. These include reports on hospitalisations, critical care bed occupancy and remaining capacity, A&E usage and completed tests (including specifically those carried out on NHS staff).

But it also provides a means for the centre to get guidance and information directly to NHS bodies, via a SPOC in each organisation. ‘It means that the centre knows it is getting information to the right places and things don’t get missed,’ says Mr Ellcock.

Staff at the centre can operate in different roles. Mostly Mr Ellcock fills the role of incident manager, taking primary responsibility for ensuring the daily battle rhythm, setting out the times for different sitreps to be submitted, is adhered to. He has on occasion filled the key role of SPOC and has also taken turns at being task manager.

The SPOC effectively fields all email and telephone queries to the ICC and passes them on to different subject-specific expert teams out in the service – known as cells and covering issues such as workforce, reporting, critical care, clinical services and oxygen provision. A task manager logs each of these number-referenced incidents and oversees them to completion – or chases down answers if incidents remain open after 24 hours.

On some days, the service can log up to 150 tasks in a single seven-hour shift. Numbers of hospital deaths as a result of Covid-19 were initially channelled through the regional ICCs, but this has now been replaced with a system enabling trusts to upload figures directly. However, the ICC does have a role in auditing this information to ensure that key data is recorded correctly.

‘It is tiring but exciting work,’ admits Mr Ellcock, ‘and I’ve learnt a huge amount.’

The ICC was also initially involved in fielding trust questions about personal protective equipment (PPE) and supporting trusts to support each other, as the whole country sought to cope with widely reported shortages of some key protective items. However, dealing with the volume of queries and issues was not sustainable and this has now been separated out from other issues. A military liaison officer has been brought in to focus specifically on providing support in this area – a solution that has worked well both for PPE and in enabling the broader team to meet their wider commitments.

Mr Ellcock says it is important to be clear about the ICC’s role, while it coordinates the process of resolving local NHS bodies’ queries, it does not issue local guidance. ‘We pass queries up to the national ICC SPOC, who refers them into one of their teams and this might then come back out as national guidance,’ he says. ‘The process ensures there is one way into the national team and one way out again.’

Mr Ellcock says, having spent a lot of time working from home and out and about in his FFF role, he has enjoyed working in an office environment. The office is organised to enable safe working, but he says that the nature of the work performed by the ICC means that being in the same space is a distinct advantage. However, he also suggests that Microsoft Teams has been important in underpinning the unit’s work, providing a single repository for all guidance and enabling team meetings with remote members.

‘The ICC fulfils an important role, ensuring that people in frontline organisations have a place to come when they have urgent queries and ensuring we get guidance to the right people and know that they have received it,’ he says. ‘It feels good to be part of a team that is helping to ensure we have a coordinated response across the whole North West. NHS bodies have already shown their readiness to work together in response to the Covid-19 virus – both in terms of mutual support around PPE and in many other areas. Continuing to work together will be important in seeing the response through.’