We held our second graduation ceremony in December at the HFMA annual conference. It was a great occasion and our successful students said they thoroughly enjoyed it too. But more than anything, the ceremony marked a key milestone in what is fast becoming an established and well-regarded postgraduate qualification in healthcare finance.

Developing this qualification has been a longstanding ambition for the HFMA. Student feedback is that it is demanding, but hugely rewarding. And the enthusiasm of students and ongoing interest in new sign-ups to different aspects of the qualifications confirms that we are meeting a specific demand in the area of healthcare business and finance.

Forty-one graduates were invited to the ceremony, including students who had completed either of the two diplomas (advanced or advanced higher), as well as students receiving their advanced certificates for completing the core Making finance work in the NHS module. This module is mandatory as part of the advanced diploma, but can also be studied separately as a standalone course (as can other modules in both diplomas). In total, more than 100 people have studied for some aspect of these level 7 qualifications during the past year.

Reading the job titles and organisations of our successful students gives a real insight into the broad appeal of this qualification, both inside and outside the finance function. We had people from across the whole spectrum of NHS finance, from chief finance officers to directorate accountants and finance business partners – from commissioners, providers and national bodies. There were representatives from planning and contract governance. And the clinical community was also well represented with speciality registrars, clinical fellows and associate medical directors. There was even a commercial banker.

Given this spectrum, it is no wonder students value the networks created by the cohort of students, giving everyone the opportunity to see things from different perspectives.

Seven of the students successfully completing the advanced higher diploma are embarking on the final third of a new MBA programme in healthcare finance, developed by BPP University – which kicks off in February. That’s another exciting development, and we are sure there will be lots more to follow.

The awards ceremony also saw Sonita Osborne, head of financial services at George Eliot NHS Trust, named as the winner of the 2018 Tony Whitfield Award, recognising her as the student of the year.

The award, which was being presented for the second time after last year’s launch, was named after former HFMA president Mr Whitfield, who was a major contributor to the association’s education agenda. Mr Whitfield sadly died over the Christmas period (see page 30).

Although he was too ill to attend December’s ceremony, he sent a message underlining how the qualification was in keeping with his theme while president – Knowing the business. The theme was based on a belief that to serve patients and taxpayers you need an understanding of the context of healthcare. ‘It is incumbent on us to ensure we undertake continuing professional development to keep [our] knowledge base fresh,’ he said. ‘In taking a course of study with the HFMA, you are embodying that belief – a rigorous endeavour tailored to our industry.’

Ms Osborne, who completed the advanced higher diploma, was selected from a shortlist of three students, which included Carl Smith (Leeds West Clinical Commissioning Group) and Gianluca Paderi (Nottingham University Hospitals NHS Trust). Ms Osborne’s award was collected on the night on her behalf by Haq Khan, director of finance at George Eliot. 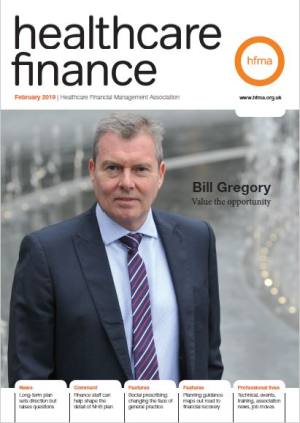 Introduction to costing in the NHS