The Clatterbridge Cancer Centre NHS Foundation Trust recently pulled off a feat that is seldom seen in the public sector. In June, it opened its new £143m cancer hospital in the centre of Liverpool, broadly on budget and on time. And what’s more, it opened the facility during the current Covid pandemic. In fact, it accelerated the final commissioning phase to bring the unit on stream to aid the region’s response to the virus. 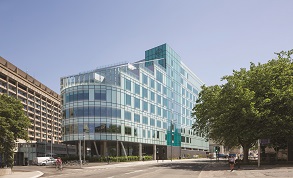 The new specialist hospital – which provides systemic anti-cancer therapies, including chemotherapy and gene therapy, as well as radiotherapy – is undeniably eye-catching.

The state-of-the art facility, which is completely clad in glass, is highly engineered and covers 11 floors. Its chemotherapy suite on the 10th floor offers floor-to-ceiling views of the city skyline, including its two cathedrals, and across the Mersey.

It has also been built using a mixture of public funding, borrowing, charitable donations and the trust’s own surpluses.

No private finance model was considered for the project, despite the strategic outline case being approved in the same year that the (then new, now withdrawn) PF2 financing programme was introduced. Finance director James Thomson says the success of the Clatterbridge programme owes a lot to the way the project was managed.

‘One of the key points has been our wholly owned subsidiary, PropCare Services, which has managed the construction from the outset,’ he says. The subsidiary, which was relatively unique when it was set up in 2016, has its own board and governance structure and has been able to focus on the hospital project. This has involved developing close relationships with contractors while keeping on top of all the necessary due diligence.

In fact, relationships between the trust and PropCare, and with main contractor Laing O’Rourke, subcontractors and facilities management providers, were a key part in the success of the project. ‘Mutual trust was important,’ says Mr Thomson. ‘It was key that we could work our way through any obstacles together. There could be tough conversations, but we shared the same goal and had a similar mindset and ethos.

‘I also think we have worked hard to effectively manage the risks of building the new hospital, with the subsidiary having the autonomy to make decisions but in a clear framework, which means all the big decisions are discussed and approved,’ he continues.

‘There have been pinch points along the way – such as changes in the commissioning landscape and how trust financial performance has been managed. But having a dedicated team in place with the right levels of skill has been really important.’

While the new centre does allow for expansion, it is really all about improving quality of, and access to, services.

The tertiary trust performs well – the Care Quality Commission rated it good overall in its 2019 inspection report. It was rated outstanding for ‘caring’ and the report said that inspectors were ‘not concerned regarding the overall quality of cancer care’.

Yet despite this good general performance, the trust faces some significant challenges. Liverpool has some of the worst outcomes from cancer in England and cancer incidence across almost the whole of Cheshire and Merseyside is higher than the England average. There is a recognised issue with late cancer diagnosis, with more than one in five patients diagnosed through emergency care, which is often associated with poorer clinical outcomes.

There is also variation across the system, with people in the most deprived areas likely to have less healthy lifestyles and to engage less with screening services. And this is against a context of overall rising incidence of cancer and associated increasing costs.

Some of these issues will need to be addressed as a system – Clatterbridge hosts the region’s cancer alliance – but the new hospital will play its part in tackling others. 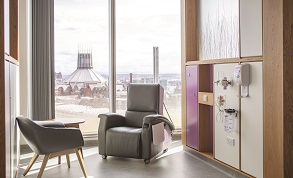 Location is important for the new hospital. The Liverpool site means the trust has moved its inpatient wards and services for rarer or more complex cancers over the Mersey from its Clatterbridge site on the Wirral. The Wirral site is towards the southern end of the Cheshire and Merseyside area. Opening a site in Liverpool moves services much closer for the 65% of the 2.4 million population served by the trust who live north of the river.

It also improves patient pathways and supports cross-boundary working. The cancer pathway spans primary care, secondary care (including acute and specialist providers in Liverpool), tertiary care and third sector bodies. The Liverpool location, which will be linked to the neighbouring new Royal Liverpool hospital when it opens, gives much greater opportunity to provide more integrated cancer care and will increase diagnostic capacity – one of the clear bottlenecks in existing pathways.

There is a safety angle too. Clatterbridge is relatively unique as one of only three specialist cancer trusts in the country and the only one not to undertake surgery. Given its size and range of services, it does not have intensive care or access to other clinical services such as cardiology or bowel surgery. ‘The new facility allows us to co-locate our inpatient activity with the full set of services you get in a major acute trust,’ says Fiona Jones (pictured), project director at the trust and managing director of the PropCare subsidiary. ‘That was one of the main drivers for the new site.’

So, all the trust’s inpatient beds have moved, slightly expanding the number to 110 – all provided as single, ensuite rooms. There is also a large non-chemotherapy day-case area with treatment couches and a clinical decision unit, where patients under treatment can be rapidly assessed – for example, when feeling treatment side effects – which helps the wider system avoid unnecessary admissions.

In general, Ms Jones says that while the centre may not be a major expansion on the previous facilities, it delivers new types of capacity. ‘Previously, patients might have had to be treated in an inpatient bed because we didn’t have bespoke facilities for day-case treatments,’ says Ms Jones. ‘But now, because we have greater segmentation – for example, for day-case and ambulatory care – people can be treated in a more appropriate setting.’

Its location next to a major teaching hospital and university is another major driver in enhancing opportunities to collaborate on research and development, making the organisation even more attractive to clinicians.

The project can trace its roots back to the Baker Cannon report in 2008, which recommended wide-ranging changes for the delivery of non-surgical oncology services across the area. Commissioners gave the new hospital the go-ahead in principle in 2012 and the outline business case was published in 2014. The design was approved in 2016 and construction began in 2017.

There were some short hold-ups in the overall timetable as the programme was reassessed in light of 2012’s Health and Social Care Act. And the programme changed fundamentally part way through the process with the decision to move the haemato-oncology service, previously provided by the Royal Liverpool Hospital, to the Clatterbridge trust. This took effect in 2017 and the new hospital plans were revised to host the service once it was open. (The relocation of the service from the Royal Liverpool was expected to take place in September).

The trust has also been preparing for the new hospital financially for several years. There was never an appetite to use the private finance model, with the trust leadership confident the £143m project could be funded from built-up surpluses, public dividend capital, loans and commissioner support. With this capital goal in mind, the trust has delivered surpluses consistently in recent years – for example, achieving its 2019/20 control total of a £3.5m surplus.

This was based on a surplus after financing costs of £9m (the control total included subsidiaries and excluded donated asset depreciation). Surpluses for the previous three years averaged more than £8m and these have helped to create a healthy cash position.

The surpluses have been delivered from an income of £197m in 2019/20. Historically, the trust’s financial position has benefited from underlying increases in cancer patient volumes and availability of new treatments such as immunotherapy.

However, 80% of clinical income comes from NHS England’s specialist commissioning team and this is now covered by a block contract. The remaining 20% has remained on tariff, but with caps and collars in place to share risk with key CCG commissioners.

Plans agreed for 2020/21 have not been implemented following the outbreak of the Covid-19 pandemic, with the whole of the NHS in England being moved to block contracting arrangements.

Some £72m of the total capital spend has been provided to the trust through public dividend capital (£35m) and a loan (£37m) from the Foundation Trust Financing Facility.

A further £11m comes from charitable donations. And the balance is made up from trust surpluses and contributions from the local economy and specialist commissioning.

Operating costs have gone up. Depreciation has increased by £4.5m and there are extra facilities costs of £4.8m.

In addition, a further £3.7m investment in workforce has been planned, adding an extra 136 whole-time equivalents to the previous 1,100 strong staff. These costs will be offset by increased income relating to the higher bed count and the repatriation of some acute oncology activity from across Cheshire and Merseyside.

‘The trust has been flexible in its approach,’ says Mr Thomson. ‘We set off with a clear programme where we knew what we wanted to do and we had a good way of delivering that. It has been well worked within the rules of the system at each stage.’

Associate director of finance John Andrews, who has been at the trust since the project was launched, says relationships with key stakeholders also worked well.

‘Working with partners locally – whether that is CCGs or specialised commissioning and their forbears and the NHS Trust Development Authority, Monitor and NHS Improvement – there’s been support,’ he says.

‘And in terms of financing it, we are providing a service that has experienced increasing demand year on year, and it is expected to recover from the reduction in referrals because of the Covid outbreak.’

The new hospital opened at the end of June with the country and the NHS still gripped by Covid-19. Clatterbridge has not been providing any frontline Covid treatment as part of the overall NHS response, but it has had to rethink its service provision for its patients, who are among the most at risk from the virus.

Around 80% of follow-up appointments were being done virtually at one point and clinicians are now listening to patient feedback and reviewing how innovations introduced during the pandemic will inform optimal delivery of services in the future.

Opening the hospital during the coronavirus crisis might seem like an additional challenge, but the trust regarded it as a way to help. The hospital’s single rooms and clean air technology – with no A&E to create potential cross-contamination – were seen as assets in the current context.

‘We had some interesting conversations with our contractor, Laing O’Rourke, and worked out how we could ensure that we opened on time despite the impact of Covid-19 on construction sites – reducing a three-month commissioning period to four weeks and accelerating the build,’ says Ms Jones.

The Wirral remains an important part of the overall equation, albeit being used in a different way and with no inpatient beds. It is also subject to an upgrade programme to create an ambulatory care village. And the trust will continue to provide radiotherapy services in a satellite centre in Aintree.

But there is no doubt that the new Liverpool hospital is the flagship in the trust’s estate.

‘We are just starting on a benefits realisation programme,’ says Mr Thomson, ‘to make sure we are getting everything we can out of the new building.’

This exercise will be particularly important as the hospital looks to work with the wider system to improve cancer outcomes.

‘The hospital provides a great place to work and will facilitate more cancer research,’ concludes Mr Thomson. ‘But it will also make it easier to transform the clinical model – creating a hub for specialist work and providing a hub-and-spoke model for less acute patients.’