Sometimes people in NHS finance – especially those in under-represented groups – need a little help to make their next career move. When Rebecca Mae-Rose (pictured) joined Mid and South Essex NHS Foundation Trust in 2019 – her first job in NHS finance – she had no intention of staying. But the three-month temporary contract was enough time for her to catch the NHS bug and change her long-term employment plans. She was hooked, but how could she make up for lost time and ensure her career wasn’t hindered by her late start?

Fortunately, help was at hand in the form of the One NHS Finance sponsorship programme, which aims to help high-potential finance staff by matching them with a senior finance leader. In particular, the programme is aimed at finance practitioners from groups that are under-represented at director level in NHS finance – women, individuals of black, Asian and minority ethnic background, those with disabilities and individuals who identify to the LGBTQ+ community.

Ms Mae-Rose (pictured) had plenty of work experience. She had completed her advanced and professional level accounting qualifications with the Association of Accounting Technicians, while working in low-secure mental health hospitals and in the city. She had also spent 12 years working for herself. Her temporary NHS position was as a band 5 management accountant, working on group accounts in the run-up to the merger of three trusts (Basildon and Thurrock, Mid-Essex and Southend) into the single foundation trust in April 2020. But she was subsequently offered a substantive role at band 7 supporting the trust’s costing and benchmarking function. She signed up to study for her CIMA finals and believed that her skills developed from the private sector and self-employment – in business consultancy and events – would be a big benefit. This was particularly the case as the trust moved increasingly into the use of service line reporting and undertaking deep dives with clinical services.

She threw herself into development activities and getting involved with the wider finance function by becoming the co-lead for Future-Focused Finance within the local integrated care system. It was by exploring the opportunities available through FFF that she came across the sponsorship programme.

‘I’d been aware from the beginning that I don’t have the strongest NHS background and it is a massive organisation to understand,’ she says. ‘I was really keen to understand the nuts and bolts of how it works – not just the things you can learn on a course, but the way that people connect. That doesn’t happen from just doing a course.

‘It is better to be able to link in through another person and almost see the NHS world through their eyes, their experiences and learn that way. And I also wanted to understand how I could progress.’

Ms Mae-Rose highlights the added benefits of having a sponsor outside your own organisation. ‘In your day job, you look solely at your role and your organisation all the time,’ she says. ‘But for me, the sponsorship was a bit of a chance to helicopter over your role, your career and really see the wider picture.’

Ms Mae-Rose didn’t meet all the sponsorship programme’s criteria – in particular, the requirement to have been in the NHS for three years. But given her FFF work and enthusiasm, she was accepted onto the scheme and matched with David Bacon.

Mr Bacon is an experienced finance director. He has held the lead finance role at Hertfordshire Community NHS Trust for nearly four years and brought to that position a background in both interim and substantive senior finance roles spanning more than 30 years. During that time, he has also been a regular member of the HFMA Accounting and Standards Committee, chairing the group for some 10 years.

He was keen to give something back to a function that has been good to him.

‘I recognise that throughout my career I’ve had help and support from managers, the HFMA, systems and regional colleagues,’ he says. ‘And that has given me a large network of contacts. Part of the sponsorship programme is to share some of that knowledge and replicate the support I had in the past and provide it to the next generation.’

Some of the support mechanisms and networking opportunities that existed previously are not as strong as they used to be, says Mr Bacon – despite the added benefits of social media and greater use of technology for communication.

‘Some of the ability to attend a meeting, to sit next to people, or to talk to someone over a coffee has disappeared – particularly over the last two years when we’ve all been working more from home.’

The programme does not impose a fixed routine on the sponsor and sponsee – instead they are left to plan out their own interactions. In the case of Ms Mae-Rose and Mr Bacon, this translated into a half-hour Teams meeting once a fortnight.

’We’ve not really had an agenda,’ says Ms Mae-Rose. ‘It’s more flowed with where I am at at that point. So there have been times when I needed advice on fitting studies around a busy family life and busy job. And we’ve taken quite a big look at my longer term NHS plan.’

One particularly useful tip she highlights was Mr Bacon’s recommendation to use job specifications and adverts for director and deputy roles to identify experience gaps. She says this has helped her to think about how she could collect the right bits of experience that would help her to reach her career goals.

She points out that many of her colleagues who are at the same qualification stage are younger, while she brings different skillsets from previous jobs.

‘So it is trying to make sure that I’ve got enough of the right mix coming through and that I’m using my time to gain the things I need,’ she says.

One key message she has taken on board is that you should not always take the line of least resistance. ‘David pointed out that, long term, if I’ve not done a good stint in financial accounts, that could hold me back,’ she says. ‘It can be really easy to go where it feels good and follow your natural skill path. But this may not always address your skill gaps.’

She adds that being able to talk frankly with someone outside your organisation, however good your relationship with your line manager, is a real asset. Mr Bacon (pictured) is clear that being a sponsor is different from a mentoring relationship – it involves using your influence to help somebody’s career development.

That can mean providing opportunities or introductions, or on occasion advocating on the sponsee’s behalf. In particular, this can involve helping to develop the sponsee’s own network.

Ms Mae-Rose has shadowed Mr Bacon and attended some formal committee meetings at Hertfordshire. But some of it is simply about introducing her to people. They met in person for the first time at the HFMA annual conference in December 2021 – with Ms Mae-Rose attending on the back of a scheme set-up by East of England regional director of finance Jeff Buggle to support the development of finance staff as part of the region’s own inclusivity agenda.

‘The HFMA conference was a really big thing for me and for my organisation to give me the time off to attend it,’ she says. ‘Having the time to network outside of the costing community with wider NHS finance staff was so valuable. Online meetings allow us to do so much in a time-efficient way. But face-to-face opportunities at the conference provide a different level of engagement.’

She was introduced to finance directors and other senior finance staff, including HFMA Finance Director of the Year Nicci Briggs. Ms Mae-Rose is also grateful for the opportunities to attend some high-level meetings at Hertfordshire – especially given the trust’s focus on community services. She says attending an audit committee meeting – and hearing the questions asked by non-executives – has helped put the overall finance role into context and underlined the importance of reports prepared for the board or other committees.

Ms Mae-Rose says the sponsorship programme has given her confidence and encouraged her to look up from her day job and think more widely.

‘I have learnt things that enhance my day job, but I’ve also gained a wider understanding of why we do what we do – it has been massively valuable.’

Beyond the current sponsorship arrangement, she is planning to shadow roles within her own organisation at a more intermediate level to help address some of the gaps she has identified in her own experience.

In principle, the sponsorship should last about two years, with the idea being that the programme should help the sponsee to step up to their next role in that time.

Mr Bacon suggests that the programme has not changed Ms Mae-Rose’s aspirations or ambitions. ‘But I think it has given her more clarity about how to achieve them.’

He says he has also learnt from the experience. ‘I think that it has helped me to understand a bit more some of the barriers to progression that some groups face,’ he says.

‘I probably thought I knew what some of the barriers were, but I didn’t realise the existence or extent of all of them. So it has helped me to increase my awareness of what some people in the NHS as a whole are dealing with just to try to progress.’

He adds that this is helping him to work out what he might do for his own finance team. ‘I am thinking about what I can do proactively to encourage people and not just assume that people will come forward when they want to do something.’

Ms Mae-Rose believes the sponsorship programme is a win-win-win: the sponsee gets the support needed to develop and progress their career; their employer gets an employee with enhanced skills to use in their current or a future role; and the finance function gets a larger pool to feed future senior appointments. ‘The programme offers something for anyone looking to grow their career,’ she adds.

‘Come and get us’ That was the rallying cry from Natasha Munro (pictured), senior finance manager at NHS England and NHS Improvement, at the HFMA annual conference in December, as she called on the assembled senior finance leaders to make use of the talents of all parts of the finance family.

Ms Munro, who joined the sponsorship programme in 2018, was highlighting the expanding pool of sponsees from the national programme all getting themselves ready for that next step up. Some 199 sponsees (and 202 sponsors) are signed up to the programme, with a concentration in the North West (70) and London (47). The programme is open to staff at all bands. However, the matching process for staff at bands 8a upwards is handled by One NHS Finance’s National Finance Academy (NFA), while those for band 7 and below will be arranged by regional academies. The NFA website will remain the first port of call for any new sign-ups to the programme.

The sponsorship programme is a deliberate response to address the fact that the senior tiers of NHS finance do not reflect the diversity of the NHS or its finance function as a whole. According to the 2019 finance function census, while women make up 62% of the NHS finance workforce, only 29% of finance directors are women. Two-thirds of all women are at band 6 and below, compared with 45% of men. And while 75% of NHS finance staff are white British, this rises to 92% at director level. 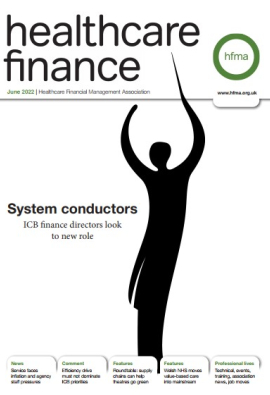