There is a huge amount to do to get new integrated care bodies ready for April, when the real work begins, says Healthcare Finance editor Steve Brown

August’s publication of guidance on setting up new integrated care boards (ICBs) from next April is undeniably helpful. But what it underlines most perhaps is the massive agenda facing systems in getting the new structures up and running.

The Interim guidance on the functions and governance of the integrated care board fleshes out some of the governance expectations on the new statutory bodies – a key part of integrated care systems – and sets out the minimum membership requirements for the new unitary boards.

And in the accompanying HR framework for developing ICBs, NHS England and NHS Improvement have provided some welcome reassurance for current board-level officers in clinical commissioning groups and ICS leads.

This confirms an ‘expectation’ that board-level staff will transfer to ICBs despite not being covered by the employment commitment that has been given to staff in positions below board level.

This may have been the presumption, but senior leaders – particularly in CCGs and including those in finance roles – were reassured to see this in black and white.

The NHS cannot afford to lose skills and staff because of a few months’ uncertainty over specific roles and functions. There may only be 42 chief finance officer roles between the new statutory ICBs, but there will be a whole range of important future finance roles that will benefit from the experience built up in CCG finance teams in recent years.

The system is changing. The ICB role is being framed in terms of stewardship rather than commissioning – as the service looks to break even semantic links to the former commissioner-provider split and market behaviours. But commissioning skills and
the finance skills that go with them will still be in high demand – whether at the system
or place level.

Determining the needs of a particular population and putting in place the right services to meet those needs will remain a core activity, wherever it is located.

So hopefully the HR framework will prevent the NHS losing valuable skills at a time when it needs them.

The current timetable suggests that ICBs have until the end of quarter 4 to appoint CFOs and medical and nursing directors. And even if these positions are filled more rapidly, it could take some time before other key finance positions are considered.

There is an immense agenda to address
by next April. Systems, and the structures within them, are likely to look quite
different from area to area, reflecting the different arrangements that have been put
in place in preparation, and a determination to be flexible.

Places will be key in how ICBs operate. Larger ICSs may have multiple places, while smaller systems may have a single place and it is thought that ICBs will be encouraged to delegate as much as possible to place.

This could take a number of forms. In some cases, this could involve delegating funds to a provider collaborative through a prime provider or alliance contract, with the ICB taking a definite stewardship role.

Or alternatively, and where provider collaboratives are not yet ready to take delegated responsibility at place, some form of accountable officer could be appointed at place-level to set up local decision-making arrangements.

Getting the structures ready with the right governance and assurance is only the most pressing demand. The real work starts once the structures are set up.

There is a big push to start to address health inequalities, and this implies moving funds around within systems and making changes to place-based allocations.

The NHS is also moving to a more trust-based system and away from the counting and billing under national tariff arrangements.

This should be accompanied by a switch to key outcome-based contracts, which have been talked about for years but remain few and far between.

The to-do list for the new ‘stewardship’ organisations is massive, both in the run-up to next April and beyond.


See CCG board level staff given reassurance on ICB transfer 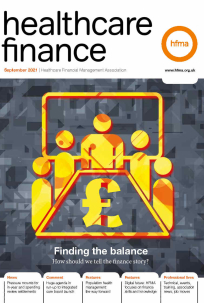