I can’t quite believe that it’s two years since I became HFMA president. And what a two years it’s been.

I’ve just done a good old-fashioned train trip to talk to some of the regional conferences and it’s really made me reflect on what we’ve been through. Most of my two years has been virtual, so it’s been a total joy to see people in person, and I’ve been really impressed at the effort the branches have put into making their conferences Covid safe.

Special shout out to all the branch committees for everything you’ve done through the pandemic. We’re a membership organisation and most of what happens does so through people like you volunteering, so a big thank you.

I remember very clearly the national conference in December 2019. I wrote a speech that was full of optimism and hope for 2020, and – with a general election taking place the following week – some asks of a new government.

My theme was Taking pride in our future, and I wanted to start my time by being deliberately future focused, and a little celebratory. I’d even managed to get the rainbow logo (via LGBTQ pride) into our publicity. We were coming up to a general election, which made us a bit short of speakers who would normally talk about policy and the NHS long-term plan.

Nevertheless, the HFMA team did a cracking job and put together a programme that inspired and challenged in equal measure. Matthew Syed encouraged us to free our minds to deal with how we continue to improve and deal with the complexities of daily life; Mark Stevenson took this one step further with his optimist’s tour of the future; and we had a number of speakers on workforce issues, including disability rights campaigner Jax Kennedy and KPMG boss Mark Britnell.

We closed with the brilliant BBC correspondent Katya Adler. And I remember my glee as I said thank you to her (I’m a massive fan), and then skipped off to Heathrow to catch a plane, on my way to present a paper at the Institute for Health Improvement’s annual conference.

So much happened, in fact, that my memory is a bit hazy in patches. So, I’ve just re-read some of the blogs I wrote at the start of 2020. In February, I noted that the spread of the coronavirus was alarming, but that the response of the NHS had been brilliant in comparison to many other countries and… our ability to track patients, contain the virus and repatriate people had been globally admired. Bit awkward, reading that back.

And then in March I described my half-term holiday experience. I went to Morocco and was contact traced using pieces of paper. I had felt relieved and, possibly slightly smug, that the NHS would be well able to cope with a pandemic because it was national, and of course, because of its sophisticated IT. Later, I massively ate my words as the track, test and trace programme unfolded, folded and unfolded again like origami.

Editorial taskmaster Steve Brown had me writing weekly blogs for a bit. I wrote about restarting services after the first wave, about integrated care, and how the social care system needed more focus. And a bit later on, I talked about Black Lives Matter and the inequalities in society that Covid had exposed. Throughout, I was always conscious of the way the finance profession had risen to the massive challenges presented.

I’d heard many stories of finance staff switching roles, some for the front line, as well as tales of colleagues defying the virus to keep the show on the road from their desks, or at home. Whatever you did, wherever you were, thank you.

During it all, life carried on in my day job at the Royal Free and we let the BBC Hospital cameras in to try and show what life was like in our hospitals, and why lockdown and mask wearing were so necessary. Having the cameras in was a difficult decision, but our staff wanted us to do it, and on reflection, I’m glad we were able to honestly tell our story and create a record for the future.

There are so many things that we used to take for granted – a continuous supply of medicines, unlimited personal protective equipment, unlimited oxygen, foreign travel, freedom of movement. So many things have changed, and as the world returns to a new normal where this particular Covid virus becomes endemic, I will never take those things for granted again.  You never know what’s around the corner.

Thank you Mark and the HFMA team for two extraordinary years. Your constant reinvention and reimagination of our service for members has been inspiring. Thank you to those of you who I met online, and latterly in person, and to those who have bothered to read these blogs. I hope that they’ve been helpful. This is our association and I think it’s amazing.

As I hand over to Owen Harkin, who I hope will have a less virtual year, I think we can continue to take pride in what we’ve done. I hope that you’ll join me in wishing Owen well – if you don’t know him yet, invite him to your area. He’s a very experienced, wise leader in the Northern Ireland system and we’re lucky to have him as our UK president next year.

And I’m sure that we will continue to look ahead as the NHS builds its recovery effort and gathers strength – and rainbows – for whatever is coming next.

During the last two years, alongside comment articles in Healthcare Finance magazine, Caroline has provided a ‘president’s playlist’, providing an insight into what she is currently reading and listening to. Here is her final playlist as HFMA president, which she claims is ‘more confessional, trashy and hopeful’.


MUSIC The Sugarbabes, who reformed with the original line-up in 2019 and who will be gigging next year. Round round we go again. Can’t wait. And, on a similar theme, Like sugar by Chaka Kahn who I’ve seen play a couple of times and is still glorious. And who can’t dance to You make me feel by Sylvester or Donna Summer’s I feel love. And I’m going out on Shake it off by Taylor Swift and Finally by CeCe Peniston.

TELEVISION my daughter Esmée and I have been obsessively watching Gray’s Anatomy. We’re only on the third series – we’ve got years to go.  It’s hilarious and wildly improbable. Last week, the team had to operate on a man with an unexploded bomb in his chest. I love it.

BOOK I’ve got The power of geography by Tim Marshall, which helps me understand why the world is the way it is, and what might happen next. It’s revelatory. And next to that is a book by Martina Cole, who I’ve just discovered. My head is in the gangland of 1960s East End of London. It’s utterly compelling. 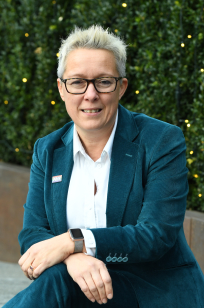