The Golden Jubilee National Hospital, Glasgow was the 10th scheduled stop on my thirteen leg 2017 HFMA branch tour. It was also the only branch conference this year to be held on a main hospital site, in an impressive purpose-built conference venue attached to the acute care facility.

Indeed, the auditor general used the opening day of the conference to launch her annual report NHS in Scotland 2017, which attracted a significant degree of national media attention.

Within the room, delegates represented the whole of health and social care responsible for best serving a 5.4 million population within a £13.4bn annual resource budget. But perhaps the statistic most worthy of note is that 63% or nearly two thirds of finance director posts in Scotland are held by women, compared with 38% or one third in Northern Ireland and just a quarter in England and Wales (26% and 25% respectively). This is more impressive still when you consider that the wider gender balance across all finance staff is broadly equal in all four nations (ranging from 62% to 71% women).

I know that one of the specific aims of England's Future-Focused Finance programme is to balance gender equality into the medium-term and so it is pleasing to have a live example of this thriving within our UK shores.

A recent and dedicated HFMA Scotland NHS financial temperature check confirmed that the issues worrying finance directors in Scotland are very similar to those experienced right now across the other three UK nations. Delivering efficiency savings polled of highest concern in Scotland, closely followed by an increasing reliance on agency staff and rising demand.

Projected medicines costs also featured heavily in the Scottish survey and was the subject of a separate special HFMA briefing paper published by our policy and technical team for HFMA Scotland earlier in the year.

I would like to particularly thank Derek Lindsay, director of finance at NHS Ayrshire and Arran and HFMA Scotland branch chairman. Derek leads a small group of dedicated branch committee serving individuals, without whom this event would simply not happen.

This was the second Scottish annual event that I have attended in recent years and so have been fortunate to witness first-hand the growth in support in Scotland. Well done Derek and the team, and do continue to draw on resources from the wider UK HFMA team as you continue to build a strong future for the HFMA Scotland branch.

During a busy period in my HFMA calendar, my next commitment took me to Antrim Area Hospital in Northern Ireland for my final UK HFMA Board meeting as national chairman. As well as an opportunity to catch up with our national executive and UK trustees on all things operational and strategic concerning the association, it was an opportunity to better understand the Northern Ireland current health and care context before I return for its branch annual conference later in the month.

All three devolved nations are extremely important to HFMA UK as we continue to share and learn. One thing is very clear – integration across health and social care is clearly the destination, whatever the respective starting point. 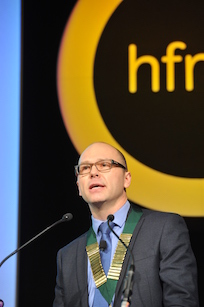