Bermuda Shorts 23: not coming home yet

Bermuda Shorts 23: not coming home yet

Euro 2020 was one of the highlights of the summer. As a Scot living in a British overseas territory, I always have divided loyalties and was very pleased to see Scotland put in such a creditable performance in the group stages against England (although I don’t think we would’ve scored if we were still playing now!), prior to our inevitable departure compounded by one of our best players contracting Covid 19. Unlike some of my countrymen, I was very comfortable switching my allegiances to England once Scotland had travelled back up the A1 and was certain that they would win the final, especially after going 2-1 up on penalties. But just as I failed to predict the Super Bowl outcome in February, and the Champions League and Europa League finals in May, so Bill Shields’ unerring ability to pick the wrong outcome continued.

Since I last wrote, much has happened on both sides of the Atlantic. Having dealt remarkably well with the early phases of the Covid-19 pandemic, Bermuda suffered a severe third wave that led to a significant increase in the number of deaths to 33, and a major impact on Bermuda Hospitals Board (BHB) with 45 inpatients including nine in intensive care at its height.

It would appear that this upturn in cases was caused by the much more contagious British, or Alpha variant, and this has prepared us for what might occur if the Delta variant were to take hold. As with previous surges, the government acted swiftly, first putting a one-week shelter in place order, followed by gradually lifting restrictions such as outdoor dining, opening of restaurants and outdoor mask wearing over a six-week period. This led to a reduction in daily cases from a high point of 120 to a limited number of new cases being reported now for over a month and the lifting of all remaining restrictions.

Given the ending of lockdown, both here in Bermuda and in the UK, May seemed like a good time to finally come back home for a visit having not been off the island for 15 months. My experiences were interesting, if surreal at times. Between departure and returning, I had no fewer than nine Covid tests. As you know, I am immunised and, while I know there is still a very real risk of catching the virus again, the cost of tests in the UK did take me by surprise, as did the need for a day eight test following a negative day five test to release. I was also somewhat surprised by the slowness of turnaround of test results. In Bermuda, these tend to take 10 hours, whereas in Britain my first test on arrival took 36 hours to be reported.

I self-isolated in my new flat in Bristol where Avril and Alex have been living since last October and it was something of a culture shock after being away for such a long time. The requirement to check in to any pub or restaurant using an app, but not to have your temperature taken seemed odd to me, as did the number of people drinking alcohol in the street. Whether this is a consequence of new-found freedom after 97 days of lockdown, or something I’ve just never been aware of before, I’m not sure.

With the UK government ending all remaining restrictions in England from 19 July, I am, again struck by the difference between the two countries. Mask wearing remains mandatory indoors in Bermuda with the government firmly of the view that this will continue to be the case, at least until herd immunity is reached. This last point is a fairly moot one at the moment in Bermuda. Like many other countries, increasing numbers of Bermudians have indicated an unwillingness to be vaccinated, citing concerns over side effects of the vaccine, infringement of civil liberties, natural immunity to Covid, and championing of alternative therapies such as Ivermectin.

For my own part, I witnessed the strength of feeling in this cohort of the community when I was called, along with executive colleagues, to present BHB’s financial position and the rationale for implementing an electronic medical record to cabinet. The meeting went well and BHB is now working with government to find a sustainable funding solution for the organisation, as the need for the only hospital on the island with negative pressure rooms, an oxygen concentrator and intensive care beds has been evident during the pandemic.

In Bermuda, the government has utilised a local plastic surgeon and immunologist to describe the impact of Covid-19, the efficacy of the various vaccines and, crucially, to explain why vaccination is the only real way out of the current position the world finds itself in – namely, the more unvaccinated hosts, the more opportunity for the virus to mutate and create more variants, in turn reducing vaccine efficacy.

Given the current precarious nature of recovery from the lockdown and the relatively low levels of immunisation in some parts of the world where cases have been low, there must be a real risk of further lockdowns as the delta and other variants continue to mutate and spread.

We are likely, therefore, it seems to me to be living with Covid for some time to come, thus emphasising the continued need for healthcare facilities to be available for those who will need them when in the greatest need. I will be sure to keep you apprised of developments here as we continue to deal with Covid and its ongoing economic impact. 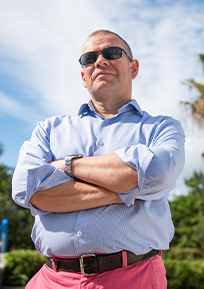 Roundtable: a vision for ophthalmology

External audit reports: the role of the audit committee